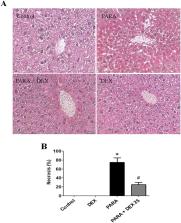 PILT mice were established by intraperitoneal administration of a hepatotoxic dose of acetaminophen (300 mg/kg). Thirty minutes later, the mice were treated with DEX at a concentration of 0, 5, 25, or 50 μg/kg. Blood and liver samples were obtained for further analysis.

The data suggest that DEX likely downregulates the JNK signaling pathway and its downstream effectors to promote its hepatoprotective effect, providing a clinical application of DEX for the attenuation of PILT.

Derick Han,  B. Gunawan,  William Gaarde … (2006)
In searching for effects of acetaminophen (APAP) on hepatocytes downstream of its metabolism that may participate in hepatotoxicity, we examined the role of stress kinases. Mouse hepatocytes and C57BL/6 mice were administered a toxic dose of APAP with or without SP600125, a chemical c-jun N-terminal kinase (JNK) inhibitor. JNK activity as reflected in phospho-c-jun levels, serum alanine transaminase (ALT), and liver histology were assessed. Similar experiments were repeated in JNK1 and JNK2 knockout mice and by using antisense oligonucleotide (ASO) to knockdown JNK. Sustained activation of JNK was observed in cultured mouse hepatocytes and in vivo in the liver after APAP treatment. The importance of this pathway was identified by the marked protective effect of SP600125 against APAP toxicity in vitro and in vivo. The specificity of this protective effect was confirmed in vivo by the knockdown of JNK1 and 2 using ASO pretreatment. JNK2 knockout mice and mice treated with JNK2 ASO exhibited partial protection against APAP. One potential target of JNK is Bax translocation, which was enhanced by APAP and blocked by the JNK inhibitor. Protection by the JNK inhibitor persisted in Kupffer cell-depleted mice, whereas there was no protection against CCl(4) or concanavalin A toxicity. This work suggests that JNK acts downstream of APAP metabolism to promote hepatotoxicity. The results suggest that JNK2 plays a predominant role, although maximum protection was seen with decrease in both forms of JNK.

Kuo Du,  Anup Ramachandran,  Hartmut Jaeschke (2016)
Acetaminophen (APAP) hepatotoxicity is characterized by an extensive oxidative stress. However, its source, pathophysiological role and possible therapeutic potential if targeted, have been controversially described. Earlier studies argued for cytochrome P450-generated reactive oxygen species (ROS) during APAP metabolism, which resulted in massive lipid peroxidation and subsequent liver injury. However, subsequent studies convincingly challenged this assumption and the current paradigm suggests that mitochondria are the main source of ROS, which impair mitochondrial function and are responsible for cell signaling resulting in cell death. Although immune cells can be a source of ROS in other models, no reliable evidence exists to support a role for immune cell-derived ROS in APAP hepatotoxicity. Recent studies suggest that mitochondrial targeted antioxidants can be viable therapeutic agents against hepatotoxicity induced by APAP overdose, and re-purposing existing drugs to target oxidative stress and other concurrent signaling events can be a promising strategy to increase its potential application in patients with APAP overdose.

Novel mechanisms of protection against acetaminophen hepatotoxicity in mice by glutathione and N-acetylcysteine.

Claudia Zwingmann,  Hartmut Jaeschke,  Chieko Saito (2009)
Acetaminophen (APAP) overdose is a major cause of acute liver failure. The glutathione (GSH) precursor N-acetylcysteine (NAC) is used to treat patients with APAP overdose for up to 48 hours. Although it is well established that early treatment with NAC can improve the scavenging of the reactive metabolite N-acetyl-p-benzoquinone imine, protective mechanisms at later times remain unclear. To address this issue, fasted C3Heb/FeJ mice were treated with 300 mg/kg APAP and then received intravenously 0.65 mmol/kg GSH or NAC at 1.5 hours after APAP. The animals were sacrificed at 6 hours. APAP alone caused severe liver injury with peroxynitrite formation and DNA fragmentation, all of which was attenuated by both treatments. However, GSH (-82%) was more effective than NAC (-46%) in preventing liver injury. Using nuclear magnetic resonance spectroscopy to measure tissue adenosine triphosphate (ATP) levels and the substrate flux through the mitochondrial Krebs cycle, it was observed that the reduced liver injury correlated with accelerated recovery of mitochondrial GSH content, maintenance of ATP levels, and an increased substrate supply for the mitochondrial Krebs cycle compared with APAP alone. NAC treatment was less effective in recovering ATP and mitochondrial GSH levels and showed reduced substrate flux through the Krebs cycle compared with GSH. However, increasing the dose of NAC improved the protective effect similar to GSH, suggesting that the amino acids not used for GSH synthesis were used as mitochondrial energy substrates. Delayed treatment with GSH and NAC protect against APAP overdose by dual mechanisms-that is, by enhancing hepatic and mitochondrial GSH levels (scavenging of reactive oxygen and peroxynitrite)-and by supporting the mitochondrial energy metabolism.