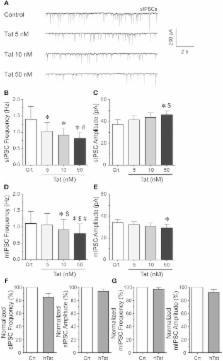 Due to combined antiretroviral therapy (cART), human immunodeficiency virus type 1 (HIV-1) is considered a chronic disease with high prevalence of mild forms of neurocognitive impairments, also referred to as HIV-associated neurocognitive disorders (HAND). Although opiate drug use can exacerbate HIV-1 Tat-induced neuronal damage, it remains unknown how and to what extent opioids interact with Tat on the GABAergic system. We conducted whole-cell recordings in mouse striatal slices and examined the effects of HIV-1 Tat in the presence and absence of morphine (1 μM) and damgo (1 μM) on GABAergic neurotransmission. Results indicated a decrease in the frequency and amplitude of spontaneous inhibitory postsynaptic currents (sIPSCs) and miniature IPSCs (mIPSCs) by Tat (5–50 nM) in a concentration-dependent manner. The significant Tat-induced decrease in IPSCs was abolished when removing extracellular and/or intracellular calcium. Treatment with morphine or damgo alone significantly decreased the frequency, but not amplitude of IPSCs. Interestingly, morphine but not damgo indicated an additional downregulation of the mean frequency of mIPSCs in combination with Tat. Pretreatment with naloxone (1 μM) and CTAP (1 μM) prevented the Tat-induced decrease in sIPSCs frequency but only naloxone prevented the combined Tat and morphine effect on mIPSCs frequency. Results indicate a Tat- or opioid-induced decrease in GABAergic neurotransmission via μ-opioid receptors with combined Tat and morphine effects involving additional opioid receptor-related mechanisms. Exploring the interactions between Tat and opioids on the GABAergic system may help to guide future research on HAND in the context of opiate drug use.

R. North,  Candace Johnson (1992)
Increased activity of dopamine-containing neurons in the ventral tegmental area is necessary for the reinforcing effects of opioids and other abused drugs. Intracellular recordings from these cells in slices of rat brain in vitro showed that opioids do not affect the principal (dopamine-containing) neurons but hyperpolarize secondary (GABA-containing) interneurons. Experiments with agonists and antagonists selective for opioid receptor subtypes indicated that the hyperpolarization of secondary cells involved the mu-receptor. Most principal cells showed spontaneous bicuculline-sensitive synaptic potentials when the extracellular potassium concentration was increased from 2.5 to 6.5 or 10.5 mM; these were prevented by TTX and assumed to result from action potentials arising in slightly depolarized local interneurons. The frequency of these synaptic potentials, but not their amplitudes, was reduced by opioids selective for mu-receptors. It is concluded that hyperpolarization of the interneurons by opioids reduces the spontaneous GABA-mediated synaptic input to the dopamine cells. In vivo, this would lead to excitation of the dopamine cells by disinhibition, which would be expected to contribute to the positive reinforcement seen with mu-receptor agonists such as morphine and heroin.

Sensitization of T cells to CD95-mediated apoptosis by HIV-1 Tat and gp120.

H Walczak,  K-M Debatin,  Lawrence R. Frank … (1995)
The depletion of CD4+ T cells in AIDS is correlated with high turnover of the human immunodeficiency virus HIV-1 and associated with apoptosis. The molecular mechanism of apoptosis in HIV infection, however, is largely unknown. T-cell apoptosis might be affected by viral proteins such as HIV-1 Tat and gp120 (refs 10, 11). T-cell-receptor (TCR)-induced apoptosis was recently shown to involve the CD95 (APO-1/Fas) receptor. We show here that HIV-1 Tat strongly sensitizes TCR- and CD4(gp120)-induced apoptosis by upregulation of CD95 ligand expression. Concentrations of Tat found to be effective in cultures of HIV-1-infected cells were also observed in sera from HIV-1-infected individuals. Taken together, our results indicate that HIV-1 Tat and gp120 accelerate CD95-mediated, activation-induced T-cell apoptosis, a mechanism that may contribute to CD4+ T-cell depletion in AIDS.

This article was submitted to Neuropharmacology, a section of the journal Frontiers in Neuroscience