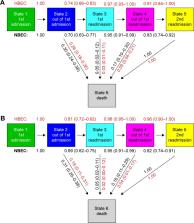 The impacts of high blood eosinophil count (HBEC) at admission for COPD exacerbation on posthospitalization outcomes are still unclear. Previous studies have focused on its associations with first readmission rates; yet, its impacts on longitudinal outcomes such as subsequent readmissions still have to be explored. The main objective of this study is to investigate outcomes associated with HBEC following a first hospitalization for COPD exacerbation.

This is an observational cohort study design. We retrospectively analyzed data of patients with a first hospitalization within 5 years for COPD exacerbation between April 2006 and March 2013. Patients were stratified into the HBEC group if the blood eosinophil count at admission was ≥200 cells/µL and/or ≥2% of the total white blood cells. With information on exact dates of subsequent hospitalizations and death, we modeled readmissions and death as states in a multi-state Markov model and estimated transition probabilities to the next states. Sensitivity analyses were performed by varying thresholds for the definition of HBEC (≥300 cells/µL and/or ≥3%).

Greater blood eosinophil cell counts during a first hospitalization for COPD predict increased susceptibility to up to two readmissions. These patients may however have a lower risk of death.

Analysis of induced sputum in adults with asthma: identification of subgroup with isolated sputum neutrophilia and poor response to inhaled corticosteroids.

Mark Parker,  C Brightling,  Judith L. Green … (2002)
The debate as to whether asthma is a single or heterogeneous disease remains unresolved although pathological studies, mostly using fibreoptic bronchoscopy on small numbers of subjects, have emphasised the similarities between different clinical phenotypes. Lower airway inflammation was assessed non-invasively using induced sputum in 34 normal controls and 259 adults with symptomatic asthma receiving treatment at steps 1-3 of the British Thoracic Society (BTS) guidelines. A subgroup of 49 patients treated with as required beta(2) agonists only who met BTS criteria for a step up in treatment were studied before and 2 months after treatment with inhaled budesonide 400 micro g twice daily. There was considerable heterogeneity in induced sputum cell counts, particularly in non-atopic patients. A subgroup of 60 patients had a distinctive sputum cell profile with a neutrophil count higher than our normal range (>65.3%) and a normal sputum eosinophil count (<1.9%). These patients were older, predominantly female, and were more likely to be non-atopic but otherwise had similar clinical and physiological features to the group as a whole. Among the 49 subjects studied before and after inhaled budesonide, 11 patients had an isolated sputum neutrophilia. Following treatment, these patients showed significantly less improvement in visual analogue symptom scores (-5.5 v -19.4 mm; mean difference 13.9; 95% CI 0.7 to 27.0), forced expiratory volume in 1 second (FEV(1)) (-0.08 v 0.13 l; mean difference 0.21; 95% CI 0.03 to 0.39), and concentration of methacholine provoking a fall in FEV(1) of 20% or more (PC(20)) (0.15 v 1.29 doubling doses; mean difference 1.11; 95% CI 0.13 to 2.15) than the remaining 38 patients. These results suggest the presence of a distinct subgroup of patients with mild to moderate asthma who have predominantly neutrophilic airway inflammation and who respond less well to treatment with inhaled corticosteroids.

Predictors of exacerbation risk and response to budesonide in patients with chronic obstructive pulmonary disease: a post-hoc analysis of three randomised trials.

Peter M A Calverley,  Stephen Rennard,  Kai T. Richter … (2018)
The peripheral blood eosinophil count might help identify those patients with chronic obstructive pulmonary disease (COPD) who will experience fewer exacerbations when taking inhaled corticosteroids (ICS). Previous post-hoc analyses have proposed eosinophil cutoffs that are both arbitrary and limited in evaluating complex interactions of treatment response. We modelled eosinophil count as a continuous variable to determine the characteristics that determine both exacerbation risk and clinical response to ICS in patients with COPD.