Evaluation of the antitumor activity of NOV202, a novel microtubule targeting and vascular disrupting agent 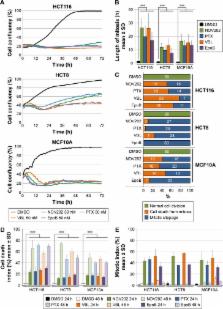 Overall, ~65% of patients diagnosed with advanced ovarian cancer (OC) will relapse after primary surgery and adjuvant first-line platinum- and taxane-based chemotherapy. Significant improvements in the treatment of OC are expected from the development of novel compounds having combined cytotoxic and antiangiogenic properties that make them effective on refractory tumors.

Permeability of NOV202 was determined with Caco-2 monolayer assay. The compound’s pharmacokinetic profile and plasma:brain distribution were assessed in male C57Bl/6 mice. The compound’s impacts on tubulin, microtubules and cell cycle were investigated by using in vitro tubulin polymerization assay, cell-based immunofluorescence and live cell microscopy. The IC 50 concentrations of NOV202 were assessed in a panel of eight cancer cell lines. Impact of the compound on vascular tube formation was determined using the StemKit and Chick chorioallantoic membrane assays. The in vivo efficacy of the compound was analyzed with an OC xenograft mouse model.

NOV202 was found to suppress cancer cell proliferation at low nanomolar concentrations (IC 50 2.3–12.0 nM) and showed equal efficacy between OC cell line A2780 (IC 50 2.4 nM) and its multidrug-resistant subline A2780/Adr (IC 50 2.3 nM). Mechanistically, NOV202 targeted tubulin polymerization in vitro in a dose-dependent manner and in cells induced an M phase arrest. In vivo, NOV202 caused a dose-dependent reduction of tumor mass in an A2780 xenograft model, which at the highest dose (40 mg/kg) was comparable to the effect of paclitaxel (24 mg/kg). Interestingly, NOV202 exhibited vascular disrupting properties that were similar to the effects of Combretastatin A4.

NOV202 is a novel tubulin and vascular targeting agent that shows strong anticancer efficacy in cells and OC xenograft models. The finding that the compound induced significantly more cell death in Pgp/MDR1 overexpressing OC cells compared to vincristine and paclitaxel warrants further development of the compound as a new therapy for OC patients with treatment refractory tumors and/or relapsing disease.

Biochemical, cellular, and pharmacological aspects of the multidrug transporter.

I. Pastan,  Indu S. Ambudkar,  M Ramachandra … (1998)
Considerable evidence has accumulated indicating that the multidrug transporter or P-glycoprotein plays a role in the development of simultaneous resistance to multiple cytotoxic drugs in cancer cells. In recent years, various approaches such as mutational analyses and biochemical and pharmacological characterization have yielded significant information about the relationship of structure and function of P-glycoprotein. However, there is still considerable controversy about the mechanism of action of this efflux pump and its function in normal cells. This review summarizes current research on the structure-function analysis of P-glycoprotein, its mechanism of action, and facts and speculations about its normal physiological role.

p21 is necessary for the p53-mediated G1 arrest in human cancer cells.

Amy T. Waldman,  W Kinzler,  B Vogelstein (1995)
DNA-damaging agents induce a p53-dependent G1 arrest that may be critical for p53-mediated tumor suppression. It has been suggested that p21WAF1/CIP1, a cdk inhibitory protein transcriptionally regulated by p53, is an effector of this arrest. To test this hypothesis, an isogenic set of human colon adenocarcinoma cell lines differing only in their p21 status was created. The parental cell line underwent the expected cell cycle changes upon induction of p53 expression by DNA damage, but the G1 arrest was completely abrogated in p21-deficient cells. These results unambiguously establish p21 as a critical mediator of one well-documented p53 function and have important implications for understanding cell cycle checkpoints and the mechanism(s) through which p53 inhibits human neoplasia.

Gretta Armstrong,  N Rosenshein,  E Rowinsky … (1989)
To assess the activity of taxol in patients with advanced, progressive, and drug-refractory ovarian cancer and to delineate more clearly the toxicity of taxol in this patient population. Nonrandomized, prospective phase II trial. Forty-seven patients with drug-refractory epithelial ovarian cancer who had one or more lesions measurable in perpendicular diameters. Of these patients, 45 were evaluable for toxicity and 40 were evaluable for response. PATIENTS were treated every 22 days with varying doses of taxol (110 to 250 mg/m2 body surface) given as a 24-hour infusion with subsequent doses based on adverse effects. A premedication regimen was used to avoid acute hypersensitivity reactions. Twelve patients (30%; CI, 16% to 44%) responded to taxol for periods lasting from 3 to 15 months. The dose-limiting toxicity was myelosuppression with leukocytes affected more severely and commonly than thrombocytes or reticulocytes. Leukopenia was usually brief in duration but was associated with sepsis in 3 cases (2 fatal). Other adverse effects included myalgias, arthralgias, alopecia, diarrhea, nausea, vomiting, mucositis, and peripheral neuropathy. Rare cases of cardiac and central neurotoxicity were also noted. Taxol is an active agent in drug-refractory ovarian cancer and deserves further study in combination with other active drugs in previously untreated patients with advanced ovarian cancer.