The mechanism of botulinum A on Raynaud syndrome 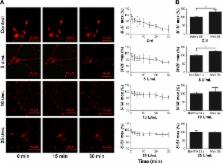 Botulinum neurotoxin type A (BoNT/A) is emerging as a treatment modality for Raynaud’s phenomenon (RP). However, the mechanism of the role of BoNT/A in antagonizing the constriction of arteriola in RP remains unclear.

We tested the constriction of arteriole diameter and the distribution of adrenergic receptors on the rat cremaster modle. Moreover, we measured the secretion of norepinephrine (NE), protein level changes and related receptors on cultured rat superior cervical ganglia neurons(SCGNs), a model of sympathetic neuron.

Based on our results, the inhibition of arteriole vasoconstriction was increased with increasing doses of BoNT/A. BoNT/A, prazosin, and BQ123 treatment can result in significant inhibition of arteriole vasoconstriction with the same electrical stimulation. The inhibition effect of prazosin was equivalent to BoNT/A, while BQ123 has a synergistic effect with BoNT/A. After treating SCGNs using BoNT/A for 30 min, the decrease in fluorescence intensity of FM1-43 slowed down which was correlated with the doses of BoNT/A. Furthermore, release of NE in the supernatant was significantly decreased as measured by enzyme-linked immunosorbent assay, 24 h after a high dose of BoNT/A (25 µ/mL). Cleaved-SNAP-25 was detected by Western blotting 24 h following BoNT/A (50 µ/mL) treatment. Moreover, receptor SV2C, GM1, and FGFR3 were detected on sympathetic neurons, similarly to cholinergic neurons.

Our study showed that BoNT/A could significantly inhibit electrical stimulation-induced arteriole vasoconstriction through the sympathetic pathway. The mechanism was similar to the cholinergic one, in which the vesicle release of sympathetic neurons could be inhibited by cleavage of SNAP-25. The end result was blocked vesicle fusion with the presynaptic membrane after BoNT/A treatment, inhibiting the release of the NE.

Reinhard Jahn,  Hartmut Niemann,  Ronald de Vries … (1993)
Neurotransmitter release is potently blocked by a group of structurally related toxin proteins produced by Clostridium botulinum. Botulinum neurotoxin type B (BoNT/B) and tetanus toxin (TeTx) are zinc-dependent proteases that specifically cleave synaptobrevin (VAMP), a membrane protein of synaptic vesicles. Here we report that inhibition of transmitter release from synaptosomes caused by botulinum neurotoxin A (BoNT/A) is associated with the selective proteolysis of the synaptic protein SNAP-25. Furthermore, isolated or recombinant L chain of BoNT/A cleaves SNAP-25 in vitro. Cleavage occurred near the carboxyterminus and was sensitive to divalent cation chelators. In addition, a glutamate residue in the BoNT/A L chain, presumably required to stabilize a water molecule in the zinc-containing catalytic centre, was required for proteolytic activity. These findings demonstrate that BoNT/A acts as a zinc-dependent protease that selectively cleaves SNAP-25. Thus, a second component of the putative fusion complex mediating synaptic vesicle exocytosis is targeted by a clostridial neurotoxin.

The synaptic vesicle protein 2C mediates the uptake of botulinum neurotoxin A into phrenic nerves.

Thomas Binz,  Hans Bigalke,  Andreas Rummel … (2006)
Botulinum neurotoxins (BoNTs) inhibit neurotransmitter release by selectively cleaving core components of the vesicular fusion machinery. The synaptic vesicle proteins Synaptotagmin-I and -II act as receptors for BoNT/B and BoNT/G. Here we show that BoNT/A also interacts with a synaptic vesicle protein, the synaptic vesicle glycoprotein 2C (SV2C), but not with the homologous proteins SV2A and SV2B. Binding of BoNT/A occurs at the membrane juxtaposed region preceding transmembrane domain 8. A peptide comprising the intravesicular domain between transmembrane domains 7 and 8 specifically reduces the neurotoxicity of BoNT/A at phrenic nerve preparations demonstrating the physiological relevance of this interaction.

Douglas A. Herrick (2005)
The pathogenesis of Raynaud's phenomenon is not fully understood. However, the last 20 yr have witnessed enormous increases in our understanding of different mechanisms which, singly or in combination, may contribute. A key point is that Raynaud's phenomenon can be either primary (idiopathic) or secondary to a number of underlying conditions, and that the pathogenesis and pathophysiology vary between these conditions. This review concentrates upon those subtypes of Raynaud's phenomenon of most interest to rheumatologists: systemic sclerosis-related Raynaud's phenomenon, primary Raynaud's phenomenon and Raynaud's phenomenon secondary to hand-arm vibration syndrome. In this review, I shall discuss the main mechanisms thought to be important in pathophysiology under the three broad headings of 'vascular', 'neural' and 'intravascular'. While these are false distinctions because all interrelate, they facilitate discussion of the key elements: the blood vessel wall (particularly the endothelium), the neural control of vascular tone, and the many circulating factors which can impair blood flow and/or cause endothelial injury. Vascular abnormalities include those of both structure and function. Neural abnormalities include deficiency of the vasodilator calcitonin gene-related peptide (released from sensory afferents), alpha(2)-adrenoreceptor activation (possibly with up-regulation of the normally 'silent' alpha(2C)-adrenoreceptor) and a central nervous system component. Intravascular abnormalities include platelet activation, impaired fibrinolysis, increased viscosity and probably oxidant stress. As our understanding of the pathophysiology of Raynaud's phenomenon increases, so do our possibilities for identifying effective treatments.