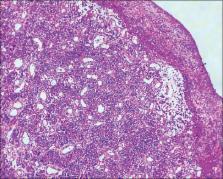 Amelanotic melanoma (AMM) presenting as pyogenic granuloma and occurring in the vicinity of acquired melanocytic nevi is rare. Herein, we report such a manifestation in a 68-year-old male who presented with the painful red nodule and multiple pigmented patches involving the left great toe. Histopathological examination of skin biopsy taken from the nodule with an immunohistochemical study using HMB45 and S-100 confirmed the diagnosis of AMM. Biopsy from the pigmented patch near the nodule showed features of melanocytic nevus. Investigative work up revealed metastatic deposits in the left inguinal lymph node with no evidence of systemic involvement, placing him in malignant melanoma Stage IIIC of American Joint Committee on Cancer (AJCC) tumor node metastasis system. The development of AMM in the vicinity of acquired melanocytic nevi and manifesting as granuloma pyogenicum is unique in this case.

Somatic activation of KIT in distinct subtypes of melanoma.

Daniel Pinkel,  Frederic B Bastian,  N A Curtin … (2006)
Melanomas on mucosal membranes, acral skin (soles, palms, and nail bed), and skin with chronic sun-induced damage have infrequent mutations in BRAF and NRAS, genes within the mitogen-activated protein (MAP) kinase pathway commonly mutated in melanomas on intermittently sun-exposed skin. This raises the question of whether other aberrations are occurring in the MAP kinase cascade in the melanoma types with infrequent mutations of BRAF and NRAS. We analyzed array comparative genomic hybridization data from 102 primary melanomas (38 from mucosa, 28 from acral skin, and 18 from skin with and 18 from skin without chronic sun-induced damage) for DNA copy number aberrations specific to melanoma subtypes where mutations in BRAF and NRAS are infrequent. A narrow amplification on 4q12 was found, and candidate genes within it were analyzed. Oncogenic mutations in KIT were found in three of seven tumors with amplifications. Examination of all 102 primary melanomas found mutations and/or copy number increases of KIT in 39% of mucosal, 36% of acral, and 28% of melanomas on chronically sun-damaged skin, but not in any (0%) melanomas on skin without chronic sun damage. Seventy-nine percent of tumors with mutations and 53% of tumors with multiple copies of KIT demonstrated increased KIT protein levels. KIT is an important oncogene in melanoma. Because the majority of the KIT mutations we found in melanoma also occur in imatinib-responsive cancers of other types, imatinib may offer an immediate therapeutic benefit for a significant proportion of the global melanoma burden.

Histopathology of the Skin