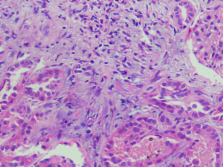 Hornet stings are generally associated with local and occasionally anaphylactic reactions. Rarely systemic complications like acute renal failure can occur following multiple stings. Renal failure is usually due to development of acute tubular necrosis as a result of intravascular haemolysis, rhabdomyolysis or shock. Rarely it can be following development of acute tubulo-interstitial nephritis.

We describe a young male, who was stung on face, head, shoulders and upper limbs by multiple hornets (Vespa orientalis). He developed acute renal failure as a result of acute tubulo-interstitial nephritis and responded to steroids.

Rare causes of acute renal failure like tubulo-interstitial nephritis should be considered in a patient with persistent oliguria and azotemia following multiple hornet stings. Renal biopsy should be undertaken early, as institution of steroid therapy may help in recovery of renal function

William H. Levine (1976)
Over the span of two or three days in August, 1972, in two separate communities in eastern Massachusetts two men, one aged 39, the other 66, each without previous overt heart disease, were stung by wasps. Each went into shock rapidly after an interval of over a half-hour developed chest pain and, later, sequential electrocardiographic changes diagnostic of acute myocardial infarction. Each survived; each had normal electrocardiograms before the sting. Though preexistent coronary artery disease can be excluded in neither, the view is favored that acute myocardial infarction in each was caused by deficient coronary perfusion secondary to anaphylactic shock induced by the wasp stings. An intriguing case was just recently reported58 of a 62-year-old man with previous angina who developed pulmonary edema but no chest pain following wasp sting and went on to show rapidly reversed electrocardiographic changes attributable to subendocardial ischemia or infarction. In a sense, this sequence fills the gap as an intermediate phase between the normal and the two individuals described here who developed pain after anaphylactic shock, then proceeded, perhaps through this phase, to develop transmural infarction.

Satinder S Kaushal,  Rinkoo D Gupta,  Neelam Grover … (2005)
Acute renal failure is an unusual complication of wasp stings. We report three cases who developed acute renal failure after multiple wasp stings (Vespa magnifica). Two patients had evidence of intravascular haemolysis and rhabdomyolysis whereas one patient investigation showed no evidence of intravascular haemolysis or rhabdomyolysis. All three cases had impaired liver functions. Oligo-anuria was seen in all three of the patients and all of them required dialytic support. One patient died of massive gastrointestinal bleeding while the remaining two recovered completely. Although acute renal failure after wasp stings is typically caused by acute tubular necrosis in the setting of haemolysis or rhabdomyolysis, in some patients, renal failure may result from a direct nephrotoxic effect or acute interstitial nephritis from a hypersensitivity reaction to the wasp venom.