Paraffin immunofluorescence for detection of immune complexes in renal biopsies: an efficient salvage technique for diagnosis of glomerulonephritis in dogs 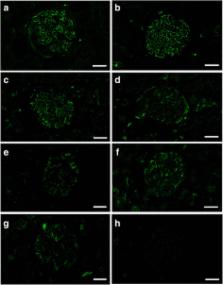 Renal biopsy is an essential tool for the diagnosis of proteinuric kidney diseases in dogs, and evaluation of immune complexes (IC) by immunofluorescence (IF) of frozen sections (IF-F) is required for the diagnosis of IC-mediated glomerulonephritis (ICGN). However, the use of frozen sections from renal biopsies can have limitations. The aim of this study was to develop a reliable IF method using formalin-fixed and paraffin-embedded (FFPE) sections to detect ICs in dog ICGN.

Renal biopsy specimens were obtained from dogs with protein-losing nephropathies. FFPE sections were prepared, and eight antigen retrieval pretreatment protocols were performed: digestion with trypsin, microwave (MW) heating in citrate buffer (MW-CB; pH 6.0), MW heating in Tris-EDTA buffer (MW-TEB; pH 9.0), as well as combinations of the above, and a non-treated control.

A combination of trypsin for 30 min (Try-30) and MW-TEB; pH 9.0 was the most effective antigen retrieval pretreatment, with clear positive signals for IgG, IgA, IgM, and C3 detected by IF-FFPE. Granular signals, an important diagnostic indicator of ICGN, were clearly observed by both IF-F and IF-FFPE after combined pretreatment with Try-30 and MW-TEB, and IgG, IgA, IgM, and C3 signals were almost completely matched in all samples by IF-F and IF-FFPE.

IF-FFPE with Try-30 and MW-TEB pretreatment is a valuable technique for the diagnosis of renal diseases in dogs. This method could be an efficient tool when standard IF-F cannot be used, or does not provide useful results due to lack of glomeruli in the specimens for IF-F.

V D'Agati, Alejandro S Galgano, M. Stokes … (2006)
Direct immunofluorescence (IF) on frozen tissue is the method of choice for the study of medical renal diseases. When no glomeruli are available, IF can be performed on the formalin-fixed paraffin-embedded tissue allocated for light microscopy after antigen retrieval with proteases. In this study, the results of IF on frozen tissue (IF-F) and on deparaffinized, pronase-treated tissue (IF-P) were compared in 71 renal biopsies representing 12 major renal diseases. Using IF-P, diagnostic findings were obtained in 100% of cases of lupus nephritis, acute post-infectious glomerulonephritis, cryoglobulinemic glomerulonephritis, fibrillary glomerulonephritis, primary amyloidosis, myeloma cast nephropathy, and light-chain Fanconi syndrome (LCFS), 88% of cases of immunoglobulin (Ig)A nephropathy, 80% of cases of light-chain deposition disease, 60% of cases of membranoproliferative glomerulonephritis type 1, 50% of cases of idiopathic membranous glomerulopathy (MGN) and 20% of cases of anti-glomerular basement membrane (GBM) disease. IF-P was less sensitive than IF-F for the detection of C3 in all disease categories and for the detection of IgG in cases of MGN and anti-GBM disease. The diagnostic kappa light-chain staining was demonstrated in 100% of cases of LCFS by IF-P versus 40% by IF-F. We conclude that IF-P is a valuable salvage immunohistochemical technique for renal biopsies lacking adequate cortical sampling for IF-F, and is superior to IF-F for the diagnosis of LCFS.

Paraffin immunofluorescence in the renal pathology laboratory: more than a salvage technique.

Immunoperoxidase versus immunofluorescence in the assessment of human renal biopsies.

Michael Breimer, Johan Mölne, C Svalander (2005)
For half a century, immunofluorescence (IF) on frozen sections has been the gold standard for immunohistochemical evaluation of renal biopsy specimens. In routine diagnostic immunohistopathologic evaluation, traditional IF has been replaced to a large extent by immunoperoxidase (IP) methods applied to paraffin sections of formaldehyde-fixed tissue. This is caused in part by the practical disadvantages inherent in the IF method, eg, separate tissue specimen and handling, UV microscopy, fading and impermanence of the label-making archiving, and difficult later investigation. Our aim for the present study is to evaluate IP as an alternative to IF in the diagnostic assessment of renal biopsy specimens. Proteolytic antigen retrieval, antibodies effective on deparaffinized sections, a sensitive detection system (Dako EnVision HRP; Dako, Copenhagen, Denmark), and a standardized and rigorously controlled procedure were applied to a series of renal biopsy specimens (n = 81) previously classified by means of light microscopy (LM) and IF. Staining for immunoglobulin G (IgG), IgA, IgM, C1q, and C3c were recorded as positive or negative for IF and IP in paired proportions, presuming that IF was the test standard. Concordant observations were 71% for all (282 of 398 observations), 82% for IgG (65 of 79 observations), and 89% for IgA (72 of 81 observations). The majority of discordant observations (74 of 116 observations) were positive by means of IP, with mesangial deposits of IgM and C1q that were not found by IF. Statistically, there was no significant difference in outcomes between IF and IP for IgG, IgA, and C3c ( P > 0.2). In addition, IP staining allowed simultaneous evaluation of tissue by LM and therefore correlation between tissue structure and immune deposits not readily attained by IF. In the present study, it is documented that for the detection of IgG, IgA, and C3c, IP applied to protease-digested deparaffinized sections of formaldehyde-fixed renal tissue is, with few exceptions, equal to IF on frozen sections. The EnVision HRP method used here is several times more effective in terms of primary antibody dilution than earlier existing IP methods, and because the avidin-biotin system is not involved, very little nonspecific background staining will occur. Discordant observations (116 of 398 observations; 29%) were in the majority (91 of 116 observations) due to positive IP findings of IgM and C1q, which deserve additional investigation.