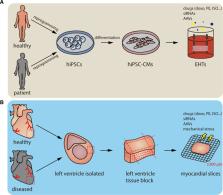 RNA modulation has become a promising therapeutic approach for the treatment of several types of disease. The emerging field of noncoding RNA-based therapies has now come to the attention of cardiovascular research, in which it could provide valuable advancements in comparison to current pharmacotherapy such as small molecule drugs or antibodies. In this review, we focus on noncoding RNA-based studies conducted mainly in large-animal models, including pigs, rabbits, dogs, and nonhuman primates. The obstacles and promises of targeting long noncoding RNAs and circRNAs as therapeutic modalities in humans are specifically discussed. We also describe novel ex vivo methods based on human cells and tissues, such as engineered heart tissues and living myocardial slices that could help bridging the gap between in vivo models and clinical applications in the future. Finally, we summarize antisense oligonucleotide drugs that have already been approved by the Food and Drug Administration for targeting mRNAs and discuss the progress of noncoding RNA-based drugs in clinical trials. Additional factors, such as drug chemistry, drug formulations, different routes of administration, and the advantages of RNA-based drugs, are also included in the present review. Recently, first therapeutic miRNA-based inhibitory strategies have been tested in heart failure patients as well as healthy volunteers to study effects on wound healing (NCT04045405; NCT03603431). In summary, a combination of novel therapeutic RNA targets, large-animal models, ex vivo studies with human cells/tissues, and new delivery techniques will likely lead to significant progress in the development of noncoding RNA-based next-generation therapeutics for cardiovascular disease.

The evolution of lncRNA repertoires and expression patterns in tetrapods.

Anamaria Necsulea,  Magali Soumillon,  Maria Warnefors … (2014)
Only a very small fraction of long noncoding RNAs (lncRNAs) are well characterized. The evolutionary history of lncRNAs can provide insights into their functionality, but the absence of lncRNA annotations in non-model organisms has precluded comparative analyses. Here we present a large-scale evolutionary study of lncRNA repertoires and expression patterns, in 11 tetrapod species. We identify approximately 11,000 primate-specific lncRNAs and 2,500 highly conserved lncRNAs, including approximately 400 genes that are likely to have originated more than 300 million years ago. We find that lncRNAs, in particular ancient ones, are in general actively regulated and may function predominantly in embryonic development. Most lncRNAs evolve rapidly in terms of sequence and expression levels, but tissue specificities are often conserved. We compared expression patterns of homologous lncRNA and protein-coding families across tetrapods to reconstruct an evolutionarily conserved co-expression network. This network suggests potential functions for lncRNAs in fundamental processes such as spermatogenesis and synaptic transmission, but also in more specific mechanisms such as placenta development through microRNA production.

MiR-33 contributes to the regulation of cholesterol homeostasis.

Circulation Research is published on behalf of the American Heart Association, Inc., by Wolters Kluwer Health, Inc. This is an open access article under the terms of the Creative Commons Attribution License, which permits use, distribution, and reproduction in any medium, provided that the original work is properly cited.