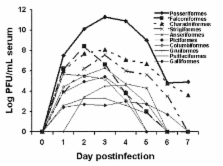 Origin of the West Nile virus responsible for an outbreak of encephalitis in the northeastern United States.

J. H. Scherret,  R Lanciotti,  B Panigrahy … (1999)
In late summer 1999, an outbreak of human encephalitis occurred in the northeastern United States that was concurrent with extensive mortality in crows (Corvus species) as well as the deaths of several exotic birds at a zoological park in the same area. Complete genome sequencing of a flavivirus isolated from the brain of a dead Chilean flamingo (Phoenicopterus chilensis), together with partial sequence analysis of envelope glycoprotein (E-glycoprotein) genes amplified from several other species including mosquitoes and two fatal human cases, revealed that West Nile (WN) virus circulated in natural transmission cycles and was responsible for the human disease. Antigenic mapping with E-glycoprotein-specific monoclonal antibodies and E-glycoprotein phylogenetic analysis confirmed these viruses as WN. This North American WN virus was most closely related to a WN virus isolated from a dead goose in Israel in 1998.

The outbreak of West Nile virus infection in the New York City area in 1999.

Deborah O’Leary,  Richard Miller,  Jacob A. Greenberg … (2001)
In late August 1999, an unusual cluster of cases of meningoencephalitis associated with muscle weakness was reported to the New York City Department of Health. The initial epidemiologic and environmental investigations suggested an arboviral cause. Active surveillance was implemented to identify patients hospitalized with viral encephalitis and meningitis. Cerebrospinal fluid, serum, and tissue specimens from patients with suspected cases underwent serologic and viral testing for evidence of arboviral infection. Outbreak surveillance identified 59 patients who were hospitalized with West Nile virus infection in the New York City area during August and September of 1999. The median age of these patients was 71 years (range, 5 to 95). The overall attack rate of clinical West Nile virus infection was at least 6.5 cases per million population, and it increased sharply with age. Most of the patients (63 percent) had clinical signs of encephalitis; seven patients died (12 percent). Muscle weakness was documented in 27 percent of the patients and flaccid paralysis in 10 percent; in all of the latter, nerve conduction studies indicated an axonal polyneuropathy in 14 percent. An age of 75 years or older was an independent risk factor for death (relative risk adjusted for the presence or absence of diabetes mellitus, 8.5; 95 percent confidence interval, 1.2 to 59.1), as was the presence of diabetes mellitus (age-adjusted relative risk, 5.1; 95 percent confidence interval, 1.5 to 17.3). This outbreak of West Nile meningoencephalitis in the New York City metropolitan area represents the first time this virus has been detected in the Western Hemisphere. Given the subsequent rapid spread of the virus, physicians along the eastern seaboard of the United States should consider West Nile virus infection in the differential diagnosis of encephalitis and viral meningitis during the summer months, especially in older patients and in those with muscle weakness.