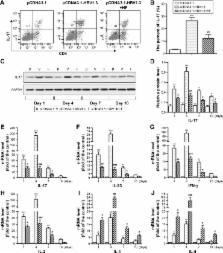 The hepatitis B virus (HBV) has caused acute and chronic liver diseases in ~350 million infected people worldwide. Halofuginone (HF) is a plant alkaloid which has been demonstrated to play a crucial role in immune regulation. Our present study explored the function of HF in the immune response of HBV-infected Sprague Dawley (SD) rats. Plasmid containing pCDNA3.1-HBV1.3 was injected in SD rats for the construction of an acute HBV-infected animal model. Our data showed that HF reduced the high concentrations of serum hepatitis B e-antigen, hepatitis B surface antigen, and HBV DNA induced by HBV infection. HF also reduced the number of T helper (Th)17 cells and the expression of interleukin (IL)-17 compared with the pCDNA3.1-HBV1.3 group. Moreover, pro-inflammatory cytokine levels (IL-17, IL-23, interferon-γ, and IL-2) were downregulated and anti-inflammatory cytokine levels (IL-4 and IL-13) were upregulated by HF. Through further research we found that the expression of AMP-activated protein kinase (AMPK) and IKBA which suppressed NF-κB activation was increased while the expression of p-NF-κB P65 was decreased in pCDNA3.1-HBV1.3+HF group compared with pCDNA3.1-HBV1.3 group, indicating that HF may work through the activation of AMPK. Finally, our conjecture was further verified by using the AMPK inhibitor compound C, which counteracted the anti-inflammation effect of HF, resulting in the decreased expression of AMPK, IKBA and increased expression of p-NF-κB P65 and reduced number of Th17 cells. In our present study, HF was considered as an anti-inflammatory factor in acute HBV-infected SD rats and worked through AMPK-mediated NF-κB p65 inactivation. This study implicated HF as a potential therapeutic strategy for hepatitis B.

Paul R Mangan,  Angela Hatton,  T. Weaver … (2006)
Since its conception two decades ago, the Th1-Th2 paradigm has provided a framework for understanding T cell biology and the interplay of innate and adaptive immunity. Naive T cells differentiate into effector T cells with enhanced functional potential for orchestrating pathogen clearance largely under the guidance of cytokines produced by cells of the innate immune system that have been activated by recognition of those pathogens. This secondary education of post-thymic T cells provides a mechanism for appropriately matching adaptive immunity to frontline cues of the innate immune system. Owing in part to the rapid identification of novel cytokines of the IL-17 and IL-12 families using database searches, the factors that specify differentiation of a new effector T cell lineage-Th17-have now been identified, providing a new arm of adaptive immunity and presenting a unifying model that can explain many heretofore confusing aspects of immune regulation, immune pathogenesis, and host defense.

Immunology of hepatitis B virus and hepatitis C virus infection.

Barbara Rehermann,  Michelina Nascimbeni (2005)
More than 500 million people worldwide are persistently infected with the hepatitis B virus (HBV) and/or hepatitis C virus (HCV) and are at risk of developing chronic liver disease, cirrhosis and hepatocellular carcinoma. Despite many common features in the pathogenesis of HBV- and HCV-related liver disease, these viruses markedly differ in their virological properties and in their immune escape and survival strategies. This review assesses recent advances in our understanding of viral hepatitis, contrasts mechanisms of virus-host interaction in acute hepatitis B and hepatitis C, and outlines areas for future studies.

F V Chisari,  Belinda Ferrari (1994)
Approximately 5% of the world population is infected by the hepatitis B virus (HBV) that causes a necroinflammatory liver disease of variable duration and severity. Chronically infected patients with active liver disease carry a high risk of developing cirrhosis and hepatocellular carcinoma. The immune response to HBV-encoded antigens is responsible both for viral clearance and for disease pathogenesis during this infection. While the humoral antibody response to viral envelope antigens contributes to the clearance of circulating virus particles, the cellular immune response to the envelope, nucleocapsid, and polymerase antigens eliminates infected cells. The class I- and class II-restricted T cell responses to the virus are vigorous, polyclonal, and multispecific in acutely infected patients who successfully clear the virus, and the responses are relatively weak and more narrowly focused in chronically infected patients who do not. The pathogenetic and antiviral potential of the cytotoxic T lymphocyte (CTL) response to HBV has been demonstrated by the induction of a severe necroinflammatory liver disease following the adoptive transfer of HBsAg-specific CTL into HBV transgenic mice, and by the noncytolytic suppression of viral gene expression and replication in the same animals by a posttranscriptional mechanism mediated by interferon gamma, tumor necrosis factor alpha, and interleukin 2. The dominant cause of viral persistence during HBV infection is the development of a weak antiviral immune response to the viral antigens. While neonatal tolerance probably plays an important role in viral persistence in patients infected at birth, the basis for poor responsiveness in adult-onset infection is not well understood and requires further analysis. Viral evasion by epitope inactivation and T cell receptor antagonism may contribute to the worsening of viral persistence in the setting of an ineffective immune response, as can the incomplete downregulation of viral gene expression and the infection of immunologically privileged tissues. Chronic liver cell injury and the attendant inflammatory and regenerative responses create the mutagenic and mitogenic stimuli for the development of DNA damage that can cause hepatocellular carcinoma. Elucidation of the immunological and virological basis for HBV persistence may yield immunotherapeutic and antiviral strategies to terminate chronic HBV infection and reduce the risk of its life-threatening sequellae.