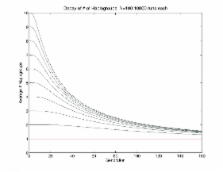 It has been known for over a decade that a majority of men who self report as members of the Jewish priesthood (Cohanim) carry a characteristic Y chromosome haplotype termed the Cohen Modal Haplotype (CMH). The CMH has since been used to trace putative Jewish ancestral origins of various populations. However, the limited number of binary and STR Y chromosome markers used previously did not provide the phylogenetic resolution needed to infer the number of independent paternal lineages that are encompassed within the Cohanim or their coalescence times. Accordingly, we have genotyped 75 binary markers and 12 Y-STRs in a sample of 215 Cohanim from diverse Jewish communities, 1,575 Jewish men from across the range of the Jewish Diaspora, and 2,099 non-Jewish men from the Near East, Europe, Central Asia, and India. While Cohanim from diverse backgrounds carry a total of 21 Y chromosome haplogroups, 5 haplogroups account for 79.5% of Cohanim Y chromosomes. The most frequent Cohanim lineage (46.1%) is marked by the recently reported P58 T->C mutation, which is prevalent in the Near East. Based on genotypes at 12 Y-STRs, we identify an extended CMH on the J-P58* background that predominates in both Ashkenazi and non-Ashkenazi Cohanim and is remarkably absent in non-Jews. The estimated divergence time of this lineage based on 17 STRs is 3,190 ± 1,090 years. Notably, the second most frequent Cohanim lineage (J-M410*, 14.4%) contains an extended modal haplotype that is also limited to Ashkenazi and non-Ashkenazi Cohanim and is estimated to be 4.2 ± 1.3 ky old. These results support the hypothesis of a common origin of the CMH in the Near East well before the dispersion of the Jewish people into separate communities, and indicate that the majority of contemporary Jewish priests descend from a limited number of paternal lineages.

Stephen M Richards,  David B Sykes,  H J Bandelt … (1995)
Analysis of variation in the hypervariable region of mitochondrial DNA (mtDNA) has emerged as an important tool for studying human evolution and migration. However, attempts to reconstruct optimal intraspecific mtDNA phylogenies frequently fail because parallel mutation events partly obscure the true evolutionary pathways. This makes it inadvisable to present a single phylogenetic tree at the expense of neglecting equally acceptable ones. As an alternative, we propose a novel network approach for portraying mtDNA relationships. For small sample sizes (< approximately 50), an unmodified median network contains all most parsimonious trees, displays graphically the full information content of the sequence data, and can easily be generated by hand. For larger sample sizes, we reduce the complexity of the network by identifying parallelisms. This reduction procedure is guided by a compatibility argument and an additional source of phylogenetic information: the frequencies of the mitochondrial haplotypes. As a spin-off, our approach can also assist in identifying sequencing errors, which manifest themselves in implausible network substructures. We illustrate the advantages of our approach with several examples from existing data sets.

Toomas Kivisild,  David Gresham,  P Underhill … (2004)
We estimate an effective mutation rate at an average Y chromosome short-tandem repeat locus as 6.9x10-4 per 25 years, with a standard deviation across loci of 5.7x10-4, using data on microsatellite variation within Y chromosome haplogroups defined by unique-event polymorphisms in populations with documented short-term histories, as well as comparative data on worldwide populations at both the Y chromosome and various autosomal loci. This value is used to estimate the times of the African Bantu expansion, the divergence of Polynesian populations (the Maoris, Cook Islanders, and Samoans), and the origin of Gypsy populations from Bulgaria.

Origin, diffusion, and differentiation of Y-chromosome haplogroups E and J: inferences on the neolithization of Europe and later migratory events in the Mediterranean area.

Chiara Magri,  Costas Triantaphyllidis,  Ornella Semino … (2004)
The phylogeography of Y-chromosome haplogroups E (Hg E) and J (Hg J) was investigated in >2400 subjects from 29 populations, mainly from Europe and the Mediterranean area but also from Africa and Asia. The observed 501 Hg E and 445 Hg J samples were subtyped using 36 binary markers and eight microsatellite loci. Spatial patterns reveal that (1). the two sister clades, J-M267 and J-M172, are distributed differentially within the Near East, North Africa, and Europe; (2). J-M267 was spread by two temporally distinct migratory episodes, the most recent one probably associated with the diffusion of Arab people; (3). E-M81 is typical of Berbers, and its presence in Iberia and Sicily is due to recent gene flow from North Africa; (4). J-M172(xM12) distribution is consistent with a Levantine/Anatolian dispersal route to southeastern Europe and may reflect the spread of Anatolian farmers; and (5). E-M78 (for which microsatellite data suggest an eastern African origin) and, to a lesser extent, J-M12(M102) lineages would trace the subsequent diffusion of people from the southern Balkans to the west. A 7%-22% contribution of Y chromosomes from Greece to southern Italy was estimated by admixture analysis.