Tobacco use and associated factors among adults in Ethiopia: further analysis of the 2011 Ethiopian Demographic and Health Survey 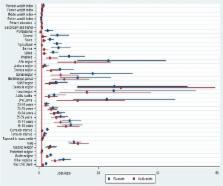 Tobacco is one of the leading preventable causes of non-communicable diseases. Previous studies gave due emphasis only for cigarette smoking with little attention given for other types of tobacco use. This study describes the prevalence of all common forms of tobacco use and identify associated factors among adults in Ethiopia.

The study used data from the 2011 Ethiopian demographic and health survey. An index was constructed from yes or no responses for common types of tobacco use. Bivariate and multivariate logistic regression statistical models were employed to determine associated factors with tobacco using adjusted odds ratios (AOR) and their 95 % confidence intervals (CI).

WHO Framework Convention on Tobacco Control

Smokeless tobacco and health in India and South Asia.

Prakash C Ray,  Prakash Gupta (2003)
South Asia is a major producer and net exporter of tobacco. Over one-third of tobacco consumed regionally is smokeless. Traditional forms like betel quid, tobacco with lime and tobacco tooth powder are commonly used and the use of new products is increasing, not only among men but also among children, teenagers, women of reproductive age, medical and dental students and in the South Asian diaspora. Smokeless tobacco users studied prospectively in India had age-adjusted relative risks for premature mortality of 1.2-1.96 (men) and 1.3 (women). Current male chewers of betel quid with tobacco in case-control studies in India had relative risks of oral cancer varying between 1.8-5.8 and relative risks for oesophageal cancer of 2.1-3.2. Oral submucous fibrosis is increasing due to the use of processed areca nut products, many containing tobacco. Pregnant women in India who used smokeless tobacco have a threefold increased risk of stillbirth and a two- to threefold increased risk of having a low birthweight infant. In recent years, several states in India have banned the sale, manufacture and storage of gutka, a smokeless tobacco product containing areca nut. In May 2003 in India, the Tobacco Products Bill 2001 was enacted to regulate the promotion and sale of all tobacco products. In two large-scale educational interventions in India, sizable proportions of tobacco users quit during 5-10 years of follow-up and incidence rates of oral leukoplakia measured in one study fell in the intervention cohort. Tobacco education must be imparted through schools, existing government health programmes and hospital outreach programmes.

Tobacco use in sub-Sahara Africa: estimates from the demographic health surveys.

Fred Pampel (2008)
Despite the growing problem of global tobacco use, accurate information on the prevalence and patterns in the world's poorest nations remains sparse. For sub-Sahara Africa, in particular, a weak knowledge base limits the targeting of strategies to combat the potential growth of tobacco use and its harmful effect on future mortality. To describe the prevalence and social patterns of the use of cigarettes and other tobacco in Africa, this study examines population-based data from 16 Demographic Health Surveys (DHS) of men aged 15-54 years and women aged 15-49 years in 14 nations. Descriptive statistics show the highest cigarette use among men in several nations of east central Africa and Madagascar, lowest use in nations of west central Africa, and medium use in nations of southern Africa. Multinomial logistic regression results for men show highest cigarette use among urban, less educated, and lower status workers. Results for women show much lower prevalence than men but similar social patterns of use. The DHS results thus give new and comparable information about tobacco use in low-income nations, disadvantaged social groups, and an understudied region of the world.