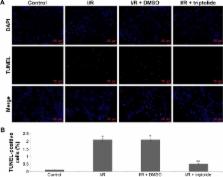 Jian. Yu,  Lin Zhang,  Paul Hwang … (2001)
Through global profiling of genes that were expressed soon after p53 expression, we identified a novel gene termed PUMA (p53 upregulated modulator of apoptosis). The protein encoded by PUMA was found to be exclusively mitochondrial and to bind to Bcl-2 and Bcl-X(L) through a BH3 domain. Exogenous expression of PUMA resulted in an extremely rapid and profound apoptosis that occurred much earlier than that resulting from exogenous expression of p53. Based on its unique expression patterns, p53 dependence, and biochemical properties, PUMA may be a direct mediator of p53-associated apoptosis.

PUMA, a potent killer with or without p53.

L. Zhang,  Lu-Jun Yu (2008)
PUMA (p53 upregulated modulator of apoptosis) is a Bcl-2 homology 3 (BH3)-only Bcl-2 family member and a critical mediator of p53-dependent and -independent apoptosis induced by a wide variety of stimuli, including genotoxic stress, deregulated oncogene expression, toxins, altered redox status, growth factor/cytokine withdrawal and infection. It serves as a proximal signaling molecule whose expression is regulated by transcription factors in response to these stimuli. PUMA transduces death signals primarily to the mitochondria, where it acts indirectly on the Bcl-2 family members Bax and/or Bak by relieving the inhibition imposed by antiapoptotic members. It directly binds and antagonizes all known antiapoptotic Bcl-2 family members to induce mitochondrial dysfunction and caspase activation. PUMA ablation or inhibition leads to apoptosis deficiency underlying increased risks for cancer development and therapeutic resistance. Although elevated PUMA expression elicits profound chemo- and radiosensitization in cancer cells, inhibition of PUMA expression may be useful for curbing excessive cell death associated with tissue injury and degenerative diseases. Therefore, PUMA is a general sensor of cell death stimuli and a promising drug target for cancer therapy and tissue damage.

To be, or not to be: NF-kappaB is the answer--role of Rel/NF-kappaB in the regulation of apoptosis.

Yongjun Fan,  M Simmons,  Jérôme Kucharczak … (2003)
During their lifetime, cells encounter many life or death situations that challenge their very own existence. Their survival depends on the interplay within a complex yet precisely orchestrated network of proteins. The Rel/NF-kappaB signaling pathway and the transcription factors that it activates have emerged as critical regulators of the apoptotic response. These proteins are best known for the key roles that they play in normal immune and inflammatory responses, but they are also implicated in the control of cell proliferation, differentiation, apoptosis and oncogenesis. In recent years, there has been remarkable progress in understanding the pathways that activate the Rel/NF-kappaB factors and their role in the cell's decision to either fight or surrender to apoptotic challenge. Whereas NF-kappaB is most commonly involved in suppressing apoptosis by transactivating the expression of antiapoptotic genes, it can promote programmed cell death in response to certain death-inducing signals and in certain cell types. This review surveys our current understanding of the role of NF-kappaB in the apoptotic response and focuses on many developments since this topic was last reviewed in Oncogene 4 years ago. These recent findings shed new light on the activity of NF-kappaB as a critical regulator of apoptosis in the immune, hepatic, epidermal and nervous systems, on the mechanisms through which it operates and on its role in tissue development, homoeostasis and cancer.