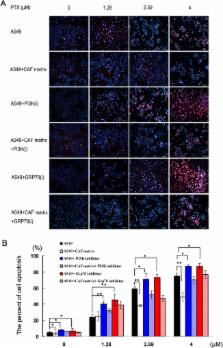 Tumor stroma and growth factors provide a survival environment to tumor cells and can modulate their chemoresistance by dysregulating several signal pathways. In this study, we fabricated a three-dimensional (3D) microfluidic chip using polydimethylsiloxane (PDMS) to investigate the impact of hepatocyte growth factor (HGF) from cancer-associated fibroblasts (CAF) on the Met/PI3K/AKT activation, glucose regulatory protein (GRP78) expression and the paclitaxel-induced A549 cell apoptosis. With a concentration gradient generator, the assembled chip was able to reconstruct a tumor microenvironment in vitro. We found high levels of HGF in the supernatants of CAF and the CAF matrix from the supernatants of activated HFL1 fibroblasts or HGF enhanced the levels of Met, PI3K and AKT phosphorylation and GRP78 expression in A549 cells cultured in a 3D cell chamber, which was abrogated by anti-HGF. Inhibition of Met attenuated the CAF matrix-enhanced PI3K/AKT phosphorylation and GRP78 expression while inhibition of PI3K reduced GRP78 expression, but not Met phosphorylation in A549 cells. Inhibition of GRP78 failed to modulate the CAF matrix-enhanced Met/PI3K/AKT phosphorylation in A549 cells. Furthermore, inhibition of PI3K or GRP78 enhanced spontaneous and paclitaxel-induced A549 cell apoptosis. Moreover, treatment with the CAF matrix inhibited spontaneous and medium or high dose of paclitaxel-induced A549 cell apoptosis. Inhibition of PI3K or GRP78 attenuated the CAF matrix-mediated inhibition on paclitaxel-induced A549 cell apoptosis. Our data indicated that HGF in the CAF matrix activated the Met/PI3K/AKT and up-regulated GRP78 expression, promoting chemoresistance to paclitaxel-mediated apoptosis in A549 cells. Our findings suggest that the microfluidic system may represent an ideal platform for signaling research and drug screening.

Alison T. Isaacs,  Samuel R. Denmeade,  W. Nathaniel Brennen (2012)
The tumor microenvironment has emerged as a novel chemotherapeutic strategy in the treatment of cancer. This is most clearly exemplified by the antiangiogenesis class of compounds. Therapeutic strategies that target fibroblasts within the tumor stroma offer another treatment option. However, despite promising data obtained in preclinical models, such strategies have not been widely used in the clinical setting, largely due to a lack of effective treatments that specifically target this population of cells. The identification of fibroblast activation protein α (FAP) as a target selectively expressed on fibroblasts within the tumor stroma or on carcinoma-associated fibroblasts led to intensive efforts to exploit this novel cellular target for clinical benefit. FAP is a membrane-bound serine protease of the prolyl oligopeptidase family with unique post-prolyl endopeptidase activity. Until recently, the majority of FAP-based therapeutic approaches focused on the development of small-molecule inhibitors of enzymatic activity. Evidence suggests, however, that FAP's pathophysiological role in carcinogenesis may be highly contextual, depending on both the exact nature of the tumor microenvironment present and the cancer type in question to determine its tumor-promoting or tumor-suppressing phenotype. As an alternative strategy, we are taking advantage of FAP's restricted expression and unique substrate preferences to develop a FAP-activated prodrug to target the activation of a cytotoxic compound within the tumor stroma. Of note, this strategy would be effective independently of FAP's role in tumor progression because its therapeutic benefit would rely on FAP's localization and activity within the tumor microenvironment rather than strictly on inhibition of its function.

Targeting the endoplasmic reticulum-stress response as an anticancer strategy.

Sandra Healy,  Adrienne M Gorman,  Parisa Mousavi-Shafaei … (2009)
The endoplasmic reticulum (ER) is the site of synthesis and folding of secretory and membrane bound proteins. The capacity of the ER to process proteins is limited and the accumulation of unfolded and misfolded proteins can lead to ER stress which has been associated with a wide range of diseases including cancer. In this review we initially provide an overview of our current understanding of how cells respond to ER stress at the molecular level and the key players involved in mediating the unfolded protein response (UPR). We review the evidence suggesting that the ER stress response could be important for the growth and development of tumors under stressful growth conditions such as hypoxia or glucose deprivation, which are commonly encountered by most solid tumors, and we analyse how it may be possible to exploit the unfolded protein response as an anticancer strategy. Two approaches to target the unfolded protein response are proposed-the first involves inhibiting components of the unfolded protein response so cells cannot adapt to stressful conditions and the second involves overloading the unfolded protein response so the cell is unable to cope, leading to cell death. We focused on proteins with an enzymatic activity that can be targeted by small molecule inhibitors as this is one of the most common approaches utilized by drug discovery companies. Finally, we review drugs currently in clinical development that affect the ER stress response and that may have potential as anti-tumor agents alone or in combination with other chemotherapeutics.

Sze-Hsien Wu,  Gwo-Bin Lee,  Bin Huang (2010)
In pharmaceutical research, an adequate cell-based assay scheme to efficiently screen and to validate potential drug candidates in the initial stage of drug discovery is crucial. In order to better predict the clinical response to drug compounds, a cell culture model that is faithful to in vivo behavior is required. With the recent advances in microfluidic technology, the utilization of a microfluidic-based cell culture has several advantages, making it a promising alternative to the conventional cell culture methods. This review starts with a comprehensive discussion on the general process for drug discovery and development, the role of cell culture in drug research, and the characteristics of the cell culture formats commonly used in current microfluidic-based, cell-culture practices. Due to the significant differences in several physical phenomena between microscale and macroscale devices, microfluidic technology provides unique functionality, which is not previously possible by using traditional techniques. In a subsequent section, the niches for using microfluidic-based cell culture systems for drug research are discussed. Moreover, some critical issues such as cell immobilization, medium pumping or gradient generation in microfluidic-based, cell-culture systems are also reviewed. Finally, some practical applications of microfluidic-based, cell-culture systems in drug research particularly those pertaining to drug toxicity testing and those with a high-throughput capability are highlighted.

This work was supported by grants from the National High-tech R&D Program (973 Program, No. 2012CB822103) and National Natural Science Foundation of China (No. 91129733 and 81330060). Mrs QW received the funding. The funders had no role in study design, data collection and analysis, decision to publish, or preparation of the manuscript.