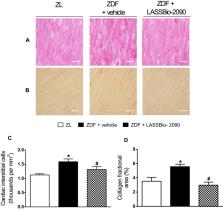 Diabetic obese patients are susceptible to the development of cardiovascular disease, including hypertension and cardiac dysfunction culminating in diabetic cardiomyopathy (DC), which represents a life-threatening health problem with increased rates of morbidity and mortality. The aim of the study is to characterize the effects of a new benzofuran N-acylhydrazone compound, LASSBio-2090, on metabolic and cardiovascular alterations in Zucker diabetic fatty (ZDF) rats presenting DC.

LASSBio-2090 alleviates metabolic disturbance and cardiomyopathy in an obese and diabetic rat model, thus representing a novel strategy for the treatment of cardiovascular complications in obesity-associated type 2 diabetes mellitus.

S Nambi,  K Mather,  A. Katz … (2000)
Insulin resistance plays an important role in the pathophysiology of diabetes and is associated with obesity and other cardiovascular risk factors. The "gold standard" glucose clamp and minimal model analysis are two established methods for determining insulin sensitivity in vivo, but neither is easily implemented in large studies. Thus, it is of interest to develop a simple, accurate method for assessing insulin sensitivity that is useful for clinical investigations. We performed both hyperinsulinemic isoglycemic glucose clamp and insulin-modified frequently sampled iv glucose tolerance tests on 28 nonobese, 13 obese, and 15 type 2 diabetic subjects. We obtained correlations between indexes of insulin sensitivity from glucose clamp studies (SI(Clamp)) and minimal model analysis (SI(MM)) that were comparable to previous reports (r = 0.57). We performed a sensitivity analysis on our data and discovered that physiological steady state values [i.e. fasting insulin (I(0)) and glucose (G(0))] contain critical information about insulin sensitivity. We defined a quantitative insulin sensitivity check index (QUICKI = 1/[log(I(0)) + log(G(0))]) that has substantially better correlation with SI(Clamp) (r = 0.78) than the correlation we observed between SI(MM) and SI(Clamp). Moreover, we observed a comparable overall correlation between QUICKI and SI(Clamp) in a totally independent group of 21 obese and 14 nonobese subjects from another institution. We conclude that QUICKI is an index of insulin sensitivity obtained from a fasting blood sample that may be useful for clinical research.

J. Marco,  Emily Tang,  Fang Tang … (2008)
Diabetic cardiomyopathy is the presence of myocardial dysfunction in the absence of coronary artery disease and hypertension. Hyperglycemia seems to be central to the pathogenesis of diabetic cardiomyopathy and to trigger a series of maladaptive stimuli that result in myocardial fibrosis and collagen deposition. These processes are thought to be responsible for altered myocardial relaxation characteristics and manifest as diastolic dysfunction on imaging. Sophisticated imaging technologies also have permitted the detection of subtle systolic dysfunction in the diabetic myocardium. In the early stages, these changes appear reversible with tight metabolic control, but as the pathologic processes become organized, the changes are irreversible and contribute to an excess risk of heart failure among diabetic patients independently of common comorbidities, such as coronary artery disease and hypertension. Therapeutic agents specifically targeting processes that lead to these pathophysiologic changes are in the early stages of development. Although glycemic control and early administration of neurohormonal antagonists remain the cornerstones of therapeutic approaches, newer treatment targets are currently being explored.

The receptor for advanced glycation end products is induced by the glycation products themselves and tumor necrosis factor-alpha through nuclear factor-kappa B, and by 17beta-estradiol through Sp-1 in human vascular endothelial cells.

H Fujimori,  Y. Yamamoto,  Hiroyuki Yamamoto … (2000)
The binding of advanced glycation end products (AGE) to the receptor for AGE (RAGE) is known to deteriorate various cell functions and is implicated in the pathogenesis of diabetic vascular complications. Here we show that AGE, tumor necrosis factor-alpha (TNF-alpha), and 17beta-estradiol (E(2)) up-regulated RAGE mRNA and protein levels in human microvascular endothelial cells and ECV304 cells, with the mRNA stability being essentially invariant. Transient transfection experiments with human RAGE promoter-luciferase chimeras revealed that the region from nucleotide number -751 to -629 and the region from -239 to -89 in the RAGE 5'-flanking sequence exhibited the AGE/TNF-alpha and E(2) responsiveness, respectively. Site-directed mutation of an nuclear factor-kappaB (NF-kappaB) site at -671 or of Sp-1 sites at -189 and -172 residing in those regions resulted in an abrogation of the AGE/TNF-alpha- or E(2)-mediated transcriptional activation. Electrophoretic mobility shift assays revealed that ECV304 cell nuclear extracts contained factors which retarded the NF-kappaB and Sp-1 elements, and that the DNA-protein complexes were supershifted by anti-p65/p50 NF-kappaB and anti-Sp-1/estrogen receptor alpha antibodies, respectively. These results suggest that AGE, TNF-alpha, and E(2) can activate the RAGE gene through NF-kappaB and Sp-1, causing enhanced AGE-RAGE interactions, which would lead to an exacerbation of diabetic microvasculopathy.