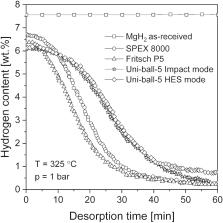 Magnesium hydride and selected magnesium-based ternary hydride (Mg 2FeH 6, Mg 2NiH 4, and Mg 2CoH 5) syntheses and modification methods, as well as the properties of the obtained materials, which are modified mostly by mechanical synthesis or milling, are reviewed in this work. The roles of selected additives (oxides, halides, and intermetallics), nanostructurization, polymorphic transformations, and cyclic stability are described. Despite the many years of investigations related to these hydrides and the significant number of different additives used, there are still many unknown factors that affect their hydrogen storage properties, reaction yield, and stability. The described compounds seem to be extremely interesting from a theoretical point of view. However, their practical application still remains debatable.

Susan Solomon,  Gian-Kasper Plattner,  Reto Knutti … (2009)
The severity of damaging human-induced climate change depends not only on the magnitude of the change but also on the potential for irreversibility. This paper shows that the climate change that takes place due to increases in carbon dioxide concentration is largely irreversible for 1,000 years after emissions stop. Following cessation of emissions, removal of atmospheric carbon dioxide decreases radiative forcing, but is largely compensated by slower loss of heat to the ocean, so that atmospheric temperatures do not drop significantly for at least 1,000 years. Among illustrative irreversible impacts that should be expected if atmospheric carbon dioxide concentrations increase from current levels near 385 parts per million by volume (ppmv) to a peak of 450-600 ppmv over the coming century are irreversible dry-season rainfall reductions in several regions comparable to those of the "dust bowl" era and inexorable sea level rise. Thermal expansion of the warming ocean provides a conservative lower limit to irreversible global average sea level rise of at least 0.4-1.0 m if 21st century CO(2) concentrations exceed 600 ppmv and 0.6-1.9 m for peak CO(2) concentrations exceeding approximately 1,000 ppmv. Additional contributions from glaciers and ice sheet contributions to future sea level rise are uncertain but may equal or exceed several meters over the next millennium or longer.

John J. Vajo,  Sky Skeith,  Florian Mertens (2005)
Destabilization of LiBH4 for reversible hydrogen storage has been studied using MgH2 as a destabilizing additive. Mechanically milled mixtures of LiBH4 + (1/2)MgH2 or LiH + (1/2)MgB2 including 2-3 mol % TiCl3 are shown to reversibly store 8-10 wt % hydrogen. Variation of the equilibrium pressure obtained from isotherms measured at 315-400 degrees C indicate that addition of MgH2 lowers the hydrogenation/dehydrogenation enthalpy by 25 kJ/(mol of H2) compared with pure LiBH4. Formation of MgB2 upon dehydrogenation stabilizes the dehydrogenated state and, thereby, destabilizes the LiBH4. Extrapolation of the isotherm data yields a predicted equilibrium pressure of 1 bar at approximately 225 degrees C. However, the kinetics were too slow for direct measurements at these temperatures.