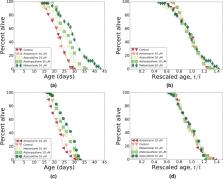 We collected 60 age-dependent transcriptomes for C. elegans strains including four exceptionally long-lived mutants (mean adult lifespan extended 2.2- to 9.4-fold) and three examples of lifespan-increasing RNAi treatments. Principal Component Analysis (PCA) reveals aging as a transcriptomic drift along a single direction, consistent across the vastly diverse biological conditions and coinciding with the first principal component, a hallmark of the criticality of the underlying gene regulatory network. We therefore expected that the organism’s aging state could be characterized by a single number closely related to vitality deficit or biological age. The “aging trajectory”, i.e. the dependence of the biological age on chronological age, is then a universal stochastic function modulated by the network stiffness; a macroscopic parameter reflecting the network topology and associated with the rate of aging. To corroborate this view, we used publicly available datasets to define a transcriptomic biomarker of age and observed that the rescaling of age by lifespan simultaneously brings together aging trajectories of transcription and survival curves. In accordance with the theoretical prediction, the limiting mortality value at the plateau agrees closely with the mortality rate doubling exponent estimated at the cross-over age near the average lifespan. Finally, we used the transcriptomic signature of age to identify possible life-extending drug compounds and successfully tested a handful of the top-ranking molecules in C. elegans survival assays and achieved up to a +30% extension of mean lifespan.

Simon Anders,  Paul Pyl,  Wolfgang Huber (2014)
Motivation: A large choice of tools exists for many standard tasks in the analysis of high-throughput sequencing (HTS) data. However, once a project deviates from standard workflows, custom scripts are needed. Results: We present HTSeq, a Python library to facilitate the rapid development of such scripts. HTSeq offers parsers for many common data formats in HTS projects, as well as classes to represent data, such as genomic coordinates, sequences, sequencing reads, alignments, gene model information and variant calls, and provides data structures that allow for querying via genomic coordinates. We also present htseq-count, a tool developed with HTSeq that preprocesses RNA-Seq data for differential expression analysis by counting the overlap of reads with genes. Availability and implementation: HTSeq is released as an open-source software under the GNU General Public Licence and available from http://www-huber.embl.de/HTSeq or from the Python Package Index at https://pypi.python.org/pypi/HTSeq. Contact: sanders@fs.tum.de

TopHat2: accurate alignment of transcriptomes in the presence of insertions, deletions and gene fusions

Daehwan Kim,  Geo M Pertea,  Cole Trapnell … (2014)
TopHat is a popular spliced aligner for RNA-sequence (RNA-seq) experiments. In this paper, we describe TopHat2, which incorporates many significant enhancements to TopHat. TopHat2 can align reads of various lengths produced by the latest sequencing technologies, while allowing for variable-length indels with respect to the reference genome. In addition to de novo spliced alignment, TopHat2 can align reads across fusion breaks, which can occur after genomic translocations. TopHat2 combines the ability to identify novel splice sites with direct mapping to known transcripts, producing sensitive and accurate alignments, even for highly repetitive genomes or in the presence of pseudogenes. TopHat2 is available at http://ccb.jhu.edu/software/tophat.