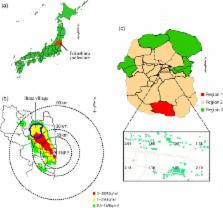 Hiroaki Terada,  Genki Katata,  Masamichi Chino … (2012)
Regional-scale atmospheric dispersion simulations were carried out to verify the source term of (131)I and (137)Cs estimated in our previous studies, and to analyze the atmospheric dispersion and surface deposition during the Fukushima Dai-ichi Nuclear Power Plant accident. The accuracy of the source term was evaluated by comparing the simulation results with measurements of daily and monthly surface depositions (fallout) over land in eastern Japan from March 12 to April 30, 2011. The source term was refined using observed air concentrations of radionuclides for periods when there were significant discrepancies between the calculated and measured daily surface deposition, and when environmental monitoring data, which had not been used in our previous studies, were now available. The daily surface deposition using the refined source term was predicted mostly to within a factor of 10, and without any apparent bias. Considering the errors in the model prediction, the estimated source term is reasonably accurate during the period when the plume flowed over land in Japan. The analysis of regional-scale atmospheric dispersion and deposition suggests that the present distribution of a large amount of (137)Cs deposition in eastern Japan was produced primarily by four events that occurred on March 12, 15-16, 20, and 21-23. The ratio of wet deposition to the total varied widely depending on the influence by the particular event. Copyright © 2012 Elsevier Ltd. All rights reserved.

Radiation dose rates now and in the future for residents neighboring restricted areas of the Fukushima Daiichi Nuclear Power Plant.

Kouji H Harada,  Tamon Niisoe,  Mie Imanaka … (2014)
Radiation dose rates were evaluated in three areas neighboring a restricted area within a 20- to 50-km radius of the Fukushima Daiichi Nuclear Power Plant in August-September 2012 and projected to 2022 and 2062. Study participants wore personal dosimeters measuring external dose equivalents, almost entirely from deposited radionuclides (groundshine). External dose rate equivalents owing to the accident averaged 1.03, 2.75, and 1.66 mSv/y in the village of Kawauchi, the Tamano area of Soma, and the Haramachi area of Minamisoma, respectively. Internal dose rates estimated from dietary intake of radiocesium averaged 0.0058, 0.019, and 0.0088 mSv/y in Kawauchi, Tamano, and Haramachi, respectively. Dose rates from inhalation of resuspended radiocesium were lower than 0.001 mSv/y. In 2012, the average annual doses from radiocesium were close to the average background radiation exposure (2 mSv/y) in Japan. Accounting only for the physical decay of radiocesium, mean annual dose rates in 2022 were estimated as 0.31, 0.87, and 0.53 mSv/y in Kawauchi, Tamano, and Haramachi, respectively. The simple and conservative estimates are comparable with variations in the background dose, and unlikely to exceed the ordinary permissible dose rate (1 mSv/y) for the majority of the Fukushima population. Health risk assessment indicates that post-2012 doses will increase lifetime solid cancer, leukemia, and breast cancer incidences by 1.06%, 0.03% and 0.28% respectively, in Tamano. This assessment was derived from short-term observation with uncertainties and did not evaluate the first-year dose and radioiodine exposure. Nevertheless, this estimate provides perspective on the long-term radiation exposure levels in the three regions.