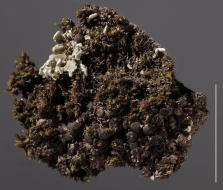 The species of Massalongia recorded and described from the Southern Hemisphere are revised and it is shown that only one is present; M. patagonica which is widespread, with populations in Australia and New Zealand that differ from the South American populations, but at present best regarded as part of the variation of that species. Records from this hemisphere of all other species placed in the genus are incorrect. The type species, M. carnosa , is restricted to the Northern Hemisphere. Two species, M. antarctica and M. novozelandica cannot be identified precisely due to lack of sufficient type material and with the types as the only collections known of these, but none belongs in Massalongia according to available data. Massalongia griseolobata (from Gough Isl.) is shown here to belong in the Pannariaceae and is part of the parmelielloid clade. M. intricata (from South Georgia) and M. olechiana (from South Shetland) have both recently been correctly transferred to the genus Steinera in the Arctomiaceae .

F Ammirati,  D. Hall,  Fu-Jun Liu … (2002)
An investigation of mushroom phylogeny using the largest subunit of RNA polymerase II gene sequences (RPB1) was conducted in comparison with nuclear ribosomal large subunit RNA gene sequences (nLSU) for the same set of taxa in the genus Inocybe (Agaricales, Basidiomycota). The two data sets, though not significantly incongruent, exhibit conflict among the placement of two taxa that exhibit long branches in the nLSU data set. In contrast, RPB1 terminal branch lengths are rather uniform. Bootstrap support is increased for clades in RPB1. Combined data sets increase the degree of confidence for several relationships. Overall, nLSU data do not yield a robust phylogeny when independently assessed by RPB1 sequences. This multigene study indicates that Inocybe is a monophyletic group composed of at least four distinct lineages-subgenus Mallocybe, section Cervicolores, section Rimosae, and subgenus Inocybe sensu Kühner, Kuyper, non Singer. Within subgenus Inocybe, two additional lineages, one composed of species with smooth basidiospores (clade I) and a second characterized by nodulose-spored species (clade II), are recovered by RPB1 and combined data. The nLSU data recover only clade I. The genera Astrosporina and Inocybella cannot be recognized phylogenetically. "Supersections" Cortinatae and Marginatae are not monophyletic groups.

Christoph Sperisen,  Stefan Zoller,  Christoph Scheidegger (1999)
Four primers for the amplification of mitochondrial DNA of lichenforming ascomycetes are presented. The primers match the conserved regions U2, U4, and U6, respectively, of mitochondrial small subunit (SSU) ribosomal DNA (rDNA). Polymerase chain reaction using different combinations of the primers produced single amplification products from DNA of eight lichen-forming fungal species but did not amplify DNA of two axenic cultured algal species. The amplification product obtained from Lobaria pulmonaria was sequenced and the 894-bp sequence was compared with the mitochondrial SSU rDNA sequence of Podospora anserine . The two sequences revealed more than 76% identity in the conserved regions U3 to U5 demonstrating that we amplified mitochondrial DNA. The primers matching U2 and U6 yielded amplification products of 800–1000 bp depending on the species examined. The variation observed suggests that mitochondrial SSU rDNA may be useful for phylogenetic analyses of lichen-forming ascomycetes.

Mats Wedin,  Elisabeth WIKLUND,  Per JØRGENSEN … (2009)
Many lichen fungi form symbioses with filamentous Nostoc cyanobacteria, which cause the lichen to swell and become extremely gelatinous when moist. Within the Lecanoromycetes, such gelatinous lichens are today mainly classified in the Collemataceae (Peltigerales, Ascomycota). We performed Bayesian MCMC, maximum likelihood, and maximum parsimony analyses of three independent markers (mtSSU rDNA, nuLSU rDNA, and RPB1), to improve our understanding of the phylogeny and classification in the Peltigerales, as well as the evolution of morphological characters that have been used for classification purposes in this group. The Collemataceae and the non-gelatinous Pannariaceae are paraphyletic but can be re-circumscribed as monophyletic if Leciophysma, Physma, Ramalodium and Staurolemma are transferred to the Pannariaceae. The gelatinous taxa transferred to the Pannariaceae deviate from other Collemataceae in having simple ascospores, and several also have a ring-shaped exciple as in other Pannariaceae, rather than the disc-shaped exciple found in the typical Collemataceae. Both Collema and Leptogium are non-monophyletic. The re-circumscribed Collemataceae shares a distinct ascus type with the sister group Placynthiaceae and the Coccocarpiaceae, whereas Pannariaceae includes a variety of structures. All Pannariaceae have one-celled ascospores, whereas all Collemataceae have two- or multi-celled spores. Reconstructions of the number of character state transformations in exciple structure, thallus gelatinosity, and ascus apex structure indicate that the number of transformations is distinctly higher than the minimum possible. Most state transformations in the exciple took place from a ring-shaped to a disc-shaped exciple. Depending on the reconstruction method, most or all transformations in thallus structure took place from a non-gelatinous to a gelatinous thallus. Gains and losses of internal structures in the ascus apex account for all or a vast majority of the number of transformations in the ascus, whereas direct transformations between asci with internal structures appear to have been rare.