Human Nav1.6 Channels Generate Larger Resurgent Currents than Human Nav1.1 Channels, but the Navβ4 Peptide Does Not Protect Either Isoform from Use-Dependent Reduction 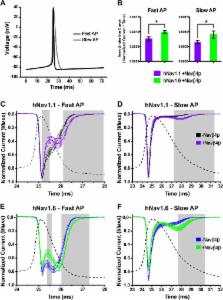 Voltage-gated sodium channels are responsible for the initiation and propagation of action potentials (APs). Two brain isoforms, Nav1.1 and Nav1.6, have very distinct cellular and subcellular expression. Specifically, Nav1.1 is predominantly expressed in the soma and proximal axon initial segment of fast-spiking GABAergic neurons, while Nav1.6 is found at the distal axon initial segment and nodes of Ranvier of both fast-spiking GABAergic and excitatory neurons. Interestingly, an auxiliary voltage-gated sodium channel subunit, Navβ4, is also enriched in the axon initial segment of fast-spiking GABAergic neurons. The C-terminal tail of Navβ4 is thought to mediate resurgent sodium current, an atypical current that occurs immediately following the action potential and is predicted to enhance excitability. To better understand the contribution of Nav1.1, Nav1.6 and Navβ4 to high frequency firing, we compared the properties of these two channel isoforms in the presence and absence of a peptide corresponding to part of the C-terminal tail of Navβ4. We used whole-cell patch clamp recordings to examine the biophysical properties of these two channel isoforms in HEK293T cells and found several differences between human Nav1.1 and Nav1.6 currents. Nav1.1 channels exhibited slower closed-state inactivation but faster open-state inactivation than Nav1.6 channels. We also observed a greater propensity of Nav1.6 to generate resurgent currents, most likely due to its slower kinetics of open-state inactivation, compared to Nav1.1. These two isoforms also showed differential responses to slow and fast AP waveforms, which were altered by the Navβ4 peptide. Although the Navβ4 peptide substantially increased the rate of recovery from apparent inactivation, Navβ4 peptide did not protect either channel isoform from undergoing use-dependent reduction with 10 Hz step-pulse stimulation or trains of slow or fast AP waveforms. Overall, these two channels have distinct biophysical properties that may differentially contribute to regulating neuronal excitability.

M L Hines,  N. Carnevale (1997)
The moment-to-moment processing of information by the nervous system involves the propagation and interaction of electrical and chemical signals that are distributed in space and time. Biologically realistic modeling is needed to test hypotheses about the mechanisms that govern these signals and how nervous system function emerges from the operation of these mechanisms. The NEURON simulation program provides a powerful and flexible environment for implementing such models of individual neurons and small networks of neurons. It is particularly useful when membrane potential is nonuniform and membrane currents are complex. We present the basic ideas that would help informed users make the most efficient use of NEURON.

Kathy B Bean (2007)
The action potential of the squid giant axon is formed by just two voltage-dependent conductances in the cell membrane, yet mammalian central neurons typically express more than a dozen different types of voltage-dependent ion channels. This rich repertoire of channels allows neurons to encode information by generating action potentials with a wide range of shapes, frequencies and patterns. Recent work offers an increasingly detailed understanding of how the expression of particular channel types underlies the remarkably diverse firing behaviour of various types of neurons.

Comparative electrophysiology of pyramidal and sparsely spiny stellate neurons of the neocortex.

B Connors,  Peter McCormick,  D McCormick … (1985)
Slices of sensorimotor and anterior cingulate cortex from guinea pigs were maintained in vitro and bathed in a normal physiological medium. Electrophysiological properties of neurons were assessed with intracellular recording techniques. Some neurons were identified morphologically by intracellular injection of the fluorescent dye Lucifer yellow CH. Three distinct neuronal classes of electrophysiological behavior were observed; these were termed regular spiking, bursting, and fast spiking. The physiological properties of neurons from sensorimotor and anterior cingulate areas did not differ significantly. Regular-spiking cells were characterized by action potentials with a mean duration of 0.80 ms at one-half amplitude, a ratio of maximum rate of spike rise to maximum rate of fall of 4.12, and a prominent afterhyperpolarization following a train of spikes. The primary slope of initial spike frequency versus injected current intensity was 241 Hz/nA. During prolonged suprathreshold current pulses the frequency of firing adapted strongly. When local synaptic pathways were activated, all cells were transiently excited and then strongly inhibited. Bursting cells were distinguished by their ability to generate endogenous, all-or-none bursts of three to five action potentials. Their properties were otherwise very similar to regular-spiking cells. The ability to generate a burst was eliminated when the membrane was depolarized to near the firing threshold with tonic current. By contrast, hyperpolarization of regular-spiking (i.e., nonbursting) cells did not uncover latent bursting tendencies. The action potentials of fast-spiking cells were much briefer (mean of 0.32 ms) than those of the other cell types.(ABSTRACT TRUNCATED AT 250 WORDS)

The research was supported by a National Institutes of Health grant (NS053422) and a grant from the Dravet Syndrome Foundation to T.R.C. R.R.P. was partially supported by a Paul and Carole Stark Medical Neuroscience Graduate Student Fellowship.