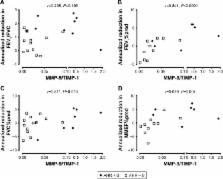 Airway hyperresponsiveness (AHR) is associated with airway inflammation and a rapid decline in lung function and is a predictor of future risk of COPD among smokers. Alveolar macrophages (AMs) from patients with COPD release a greater amount of matrix metalloproteinase (MMP)-9. We hypothesized that the imbalance between MMP-9 and tissue inhibitor of metalloproteinase-1 (TIMP-1) is related to AHR in smokers.

Healthy smokers with AHR (AHR + S) or smokers without AHR (AHR − S; divided according to a methacholine challenge test) and nonsmokers without AHR (AHR − NS) were enrolled. Spirometry was performed during enrollment and repeated after 5 years. Initially, AMs recovered from bronchoalveolar lavage (BAL) fluid were cultured in the presence of p38 mitogen-activated protein kinase (MAPK) inhibitor (SB203580), MAPK kinase (MEK) 1/2 (the MEK of extracellular signal-regulated kinase [ERK] inhibitor, PD98059), or medium alone for 24 h. The release of MMP-9 and TIMP-1 in culture supernatants was measured by enzyme-linked immunosorbent assay.

A greater reduction in forced expiratory volume in 1 s (FEV 1)/forced vital capacity (FVC), FEV 1 (as a percentage of the predicted value [%pred]), and maximal mid-expiratory flow (MMEF) was observed among AHR + S in the 5-year period. There was a higher proportion of neutrophils and a lower proportion of AMs in BAL fluid recovered from AHR + S. Compared to AMs from AHR − NS and AHR − S, AMs from nonsmokers with AHR (AHR + NS) released more MMP-9 and less TIMP-1, with an increase in MMP-9/TIMP-1 ratios. The MMP-9/TIMP-1 ratio in smokers was positively correlated with the annual decline in FEV 1%pred, FVC%pred, and MMEF%pred. Both SB203580 and PD98059 significantly reduced MMP-9, but not TIMP-1, from AMs of smokers.

AMs of AHR + NS produce excessive MMP-9 over TIMP-1, which may be a predictor of the development of airway obstruction. Inhibition of p38 MAPK and ERK suppresses the generation of MMP-9 by AMs from smokers.

K. Fan Chung,  I. Adcock (2008)
Chronic obstructive pulmonary disease is a leading global cause of morbidity and mortality that is characterised by inexorable deterioration of small airways obstruction with emphysema associated with cellular inflammation and structural remodelling. Other features include apoptosis as well as proliferation of cells, and both tissue repair and lack of tissue repair. Metalloprotease release, together with that of apoptotic factors, may underlie the emphysema, and, conversely, fibrosis of the small airways may be accounted for by the effects of growth factor activation. In advanced disease, influential factors include the development of autoimmunity, with activation of dendritic cells and T-helper cells of both type 1 and 2, and the senescence response. An inability of macrophages to ingest apoptosed cells and bacteria may exacerbate inflammatory responses. Systemic inflammation with concomitant cardiovascular disease and metabolic syndrome may reflect the effect of cigarette smoke on nonpulmonary cells. Corticosteroid resistance may be secondary to oxidative stress mechanisms, such as inactivation of histone deacetylases. The mechanisms of chronic obstructive pulmonary disease may be heterogeneous, according to severity, and clinical phenotypes need to be correlated with cellular and pathological processes. Treatments may be targeted to patients with specific mechanisms.

Dirkje S. Postma,  Klaus F Rabe (2015)
Although in textbooks asthma and chronic obstructive pulmonary disease (COPD) are viewed as distinct disorders, there is increasing awareness that many patients have features of both. This article reviews the asthma-COPD overlap syndrome.

Association between the abnormal expression of matrix-degrading enzymes by human osteoarthritic chondrocytes and demethylation of specific CpG sites in the promoter regions.

Felix Bronner,  Norikazu Yamada,  Richard O. C. Oreffo … (2005)
To investigate whether the abnormal expression of matrix metalloproteinases (MMPs) 3, 9, and 13 and ADAMTS-4 by human osteoarthritic (OA) chondrocytes is associated with epigenetic "unsilencing." Cartilage was obtained from the femoral heads of 16 patients with OA and 10 control patients with femoral neck fracture. Chondrocytes with abnormal enzyme expression were immunolocalized. DNA was extracted, and the methylation status of the promoter regions of MMPs 3, 9, and 13 and ADAMTS-4 was analyzed with methylation-sensitive restriction enzymes, followed by polymerase chain reaction amplification. Very few chondrocytes from control cartilage expressed the degrading enzymes, whereas all clonal chondrocytes from late-stage OA cartilage were immunopositive. The overall percentage of non-methylated sites was increased in OA patients (48.6%) compared with controls (20.1%): 20% versus 4% for MMP-13, 81% versus 47% for MMP-9, 57% versus 30% for MMP-3, and 48% versus 0% for ADAMTS-4. Not all CpG sites were equally susceptible to loss of methylation. Some sites were uniformly methylated, whereas in others, methylation was generally absent. For each enzyme, there was 1 specific CpG site where the demethylation in OA patients was significantly higher than that in controls: at -110 for MMP-13, -36 for MMP-9, -635 for MMP-3, and -753 for ADAMTS-4. This study provides the first evidence that altered synthesis of cartilage-degrading enzymes by late-stage OA chondrocytes may have resulted from epigenetic changes in the methylation status of CpG sites in the promoter regions of these enzymes. These changes, which are clonally transmitted to daughter cells, may contribute to the development of OA.