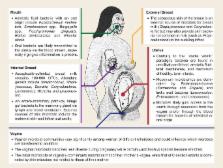 The Toll-like receptor 2 pathway establishes colonization by a commensal of the human microbiota.

Sarkis Mazmanian,  Talal A Chatila,  S Lee … (2011)
Mucosal surfaces constantly encounter microbes. Toll-like receptors (TLRs) mediate recognition of microbial patterns to eliminate pathogens. By contrast, we demonstrate that the prominent gut commensal Bacteroides fragilis activates the TLR pathway to establish host-microbial symbiosis. TLR2 on CD4(+) T cells is required for B. fragilis colonization of a unique mucosal niche in mice during homeostasis. A symbiosis factor (PSA, polysaccharide A) of B. fragilis signals through TLR2 directly on Foxp3(+) regulatory T cells to promote immunologic tolerance. B. fragilis lacking PSA is unable to restrain T helper 17 cell responses and is defective in niche-specific mucosal colonization. Therefore, commensal bacteria exploit the TLR pathway to actively suppress immunity. We propose that the immune system can discriminate between pathogens and the microbiota through recognition of symbiotic bacterial molecules in a process that engenders commensal colonization.

Kirsty A Douglas (1997)
Most aphids possess intracellular bacteria of the genus Buchnera. The bacteria are transmitted vertically via the aphid ovary, and the association is obligate for both partners: Bacteria-free aphids grow poorly and produce few or no offspring, and Buchnera are both unknown apart from aphids and apparently unculturable. The symbiosis has a nutritional basis. Specifically, bacterial provisioning of essential amino acids has been demonstrated. Nitrogen recycling, however, is not quantitatively important to the nutrition of aphid species studied, and there is strong evidence against bacterial involvement in the lipid and sterol nutrition of aphids. Buchnera have been implicated in various non-nutritional functions. Of these, just one has strong experimental support: promotion of aphid transmission of circulative viruses. It is argued that strong parallels may exist between the nutritional interactions (including the underlying mechanisms) in the aphid-Buchnera association and other insect symbioses with intracellular microorganisms.

Molecular evidence for a uniform microbial community in sponges from different oceans.

Erik B Friedrich,  Michael Wagner,  R. Moore … (2002)
Sponges (class Porifera) are evolutionarily ancient metazoans that populate the tropical oceans in great abundances but also occur in temperate regions and even in freshwater. Sponges contain large numbers of bacteria that are embedded within the animal matrix. The phylogeny of these bacteria and the evolutionary age of the interaction are virtually unknown. In order to provide insights into the species richness of the microbial community of sponges, we performed a comprehensive diversity survey based on 190 sponge-derived 16S ribosomal DNA (rDNA) sequences. The sponges Aplysina aerophoba and Theonella swinhoei were chosen for construction of the bacterial 16S rDNA library because they are taxonomically distantly related and they populate nonoverlapping geographic regions. In both sponges, a uniform microbial community was discovered whose phylogenetic signature is distinctly different from that of marine plankton or marine sediments. Altogether 14 monophyletic, sponge-specific sequence clusters were identified that belong to at least seven different bacterial divisions. By definition, the sequences of each cluster are more closely related to each other than to a sequence from nonsponge sources. These monophyletic clusters comprise 70% of all publicly available sponge-derived 16S rDNA sequences, reflecting the generality of the observed phenomenon. This shared microbial fraction represents the smallest common denominator of the sponges investigated in this study. Bacteria that are exclusively found in certain host species or that occur only transiently would have been missed. A picture emerges where sponges can be viewed as highly concentrated reservoirs of so far uncultured and elusive marine microorganisms.