Opsonic phagocytosis of Plasmodium falciparum merozoites: mechanism in human immunity and a correlate of protection against malaria 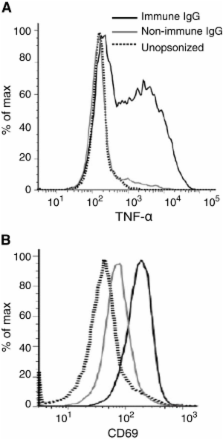 An understanding of the mechanisms mediating protective immunity against malaria in humans is currently lacking, but critically important to advance the development of highly efficacious vaccines. Antibodies play a key role in acquired immunity, but the functional basis for their protective effect remains unclear. Furthermore, there is a strong need for immune correlates of protection against malaria to guide vaccine development.

Using a validated assay to measure opsonic phagocytosis of Plasmodium falciparum merozoites, we investigated the potential role of this functional activity in human immunity against clinical episodes of malaria in two independent cohorts (n = 109 and n = 287) experiencing differing levels of malaria transmission and evaluated its potential as a correlate of protection.

Opsonic phagocytosis of merozoites appears to be an important mechanism contributing to protective immunity in humans. The opsonic phagocytosis assay appears to be a strong correlate of protection against malaria, a valuable biomarker of immunity, and provides a much-needed new tool for assessing responses to blood-stage malaria vaccines and measuring immunity in populations.

Arunee Sabchareon,  Hasnaa Bouharoun-Tayoun,  Tan Chongsuphajaisiddhi … (1991)
The protective effect of African IgG antibodies against Plasmodium falciparum malaria was investigated by passive transfer in Thai patients. Sera from 333 African adults were collected in the Cote d'Ivoire and subjected to extensive screening. One hundred fifty-three samples were discarded for safety reasons, and IgG was extracted from those remaining under conditions allowing their use by the intravenous (iv) route. Eight Thai patients with P. falciparum parasitemia were treated by iv inoculation of the IgG: six with a 100 mg/kg dose given over three days, one with a single 20 mg/kg dose, and one with a single 200 mg/kg dose. To ensure a safety margin of at least 48 hours, subjects were chosen among patients having a recrudescent parasitemia following quinine treatment failure at the RI level. At that stage, symptoms were mild or absent and parasitemia was low but increasing (range 4, 200-9,000/microliters). The IgG pool exerted a profound, stage-specific, but non-sterilizing effect on each of the strains tested, and proved to be safe. Asexual parasitemia decreased by a mean 728-fold (range 46-1,086), while gametocytes were unaffected. Clearance of parasites and symptoms was as fast or faster than with drugs, and was consistent in the eight patients treated, suggesting that target antigens were equally expressed in geographically remote isolates. In peripheral blood smears, no mature forms were seen at any time during the followup, which does not support the hypothesis that reversal of cytoadherence occurred. After the disappearance of the transferred antibodies, recrudescent parasites from three patients were found to be susceptible to the same extent (mean decrease of 1,310-fold) to the same IgG preparation, indicating that selection of parasites able to escape the effect of antibodies had not occurred. No adverse side-effects were detected during the followup, which lasted one year.

Spatial and temporal heterogeneity of Anopheles mosquitoes and Plasmodium falciparum transmission along the Kenyan coast.

J Githure,  James Regens,  Joseph Keating … (2003)
The seasonal dynamics and spatial distributions of Anopheles mosquitoes and Plasmodium falciparum parasites were studied for one year at 30 villages in Malindi, Kilifi, and Kwale Districts along the coast of Kenya. Anopheline mosquitoes were sampled inside houses at each site once every two months and malaria parasite prevalence in local school children was determined at the end of the entomologic survey. A total of 5,476 Anopheles gambiae s.l. and 3,461 An. funestus were collected. Species in the An. gambiae complex, identified by a polymerase chain reaction, included 81.9% An. gambiae s.s., 12.8% An. arabiensis, and 5.3% An. merus. Anopheles gambiae s.s. contributed most to the transmission of P. falciparum along the coast as a whole, while An. funestus accounted for more than 50% of all transmission in Kwale District. Large spatial heterogeneity of transmission intensity (< 1 up to 120 infective bites per person per year) resulted in correspondingly large and significantly related variations in parasite prevalence (range = 38-83%). Thirty-two percent of the sites (7 of 22 sites) with malaria prevalences ranging from 38% to 70% had annual entomologic inoculation rates (EIR) less than five infective bites per person per year. Anopheles gambiae s.l. and An. funestus densities in Kwale were not significantly influenced by rainfall. However, both were positively correlated with rainfall one and three months previously in Malindi and Kilifi Districts, respectively. These unexpected variations in the relationship between mosquito populations and rainfall suggest environmental heterogeneity in the predominant aquatic habitats in each district. One important conclusion is that the highly non-linear relationship between EIRs and prevalence indicates that the consistent pattern of high prevalence might be governed by substantial variation in transmission intensity measured by entomologic surveys. The field-based estimate of entomologic parameters on a district level does not provide a sensitive indicator of transmission intensity in this study.

Our understanding of the mechanisms mediating protective immunity against malaria is still incomplete. This is, however, critically important to advance the development of highly efficacious vaccines.

This study by Osier and colleagues showing that opsonic phagocytosis of merozoites is an important mechanism contributing to protective immunity in humans represents a big step forward in our understanding of how antibodies mediate protection. In addition to contributing to the development of efficacious vaccines, this knowledge is also useful as a correlate of protective/effective immunity, which can be helpful to distinguish between immune and susceptible individuals.