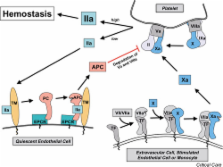 Cellular signaling by proteases of the blood coagulation cascade through members of the protease-activated receptor (PAR) family can profoundly impact on the inflammatory balance in sepsis. The coagulation initiation reaction on tissue factor expressing cells signals through PAR1 and PAR2, leading to enhanced inflammation. The anticoagulant protein C pathway has potent anti-inflammatory effects, and activated protein C signals through PAR1 upon binding to the endothelial protein C receptor. Activation of the coagulation cascade and the downstream endothelial cell localized anticoagulant pathway thus have opposing effects on systemic inflammation. This dichotomy is of relevance for the interpretation of preclinical and clinical data that document nonuniform responses to anticoagulant strategies in sepsis therapy.

Steven S Coughlin (2000)
How does the coagulation protease thrombin regulate cellular behaviour? The protease-activated receptors (PARs) provide one answer. In concert with the coagulation cascade, these receptors provide an elegant mechanism linking mechanical information in the form of tissue injury or vascular leakage to cellular responses. Roles for PARs are beginning to emerge in haemostasis and thrombosis, inflammation, and perhaps even blood vessel development.

Francine C. A. Gérard,  B Rollins (2001)
We examine here several diseases that are associated with inappropriate activation of the chemokine network. Detailed comment has been restricted to pathological states for which there are compelling data either from clinical observations or animal models. These include cardiovascular disease, allergic inflammatory disease, transplantation, neuroinflammation, cancer and HIV-associated disease. Discussion focuses on therapeutic directions in which the rapidly evolving chemokine field appears to be headed.