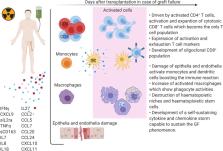 Graft failure is a severe complication of allogeneic hematopoietic stem cell transplantation (HSCT). The mechanisms involved in this phenomenon are still not completely understood; data available suggest that recipient T lymphocytes surviving the conditioning regimen are the main mediators of immune-mediated graft failure. So far, no predictive marker or early detection method is available. In order to identify a non-invasive and efficient strategy to diagnose this complication, as well as to find possible targets to prevent/treat it, we performed a detailed analysis of serum of eight patients experiencing graft failure after T-cell depleted HLA-haploidentical HSCT. In this study, we confirm data describing graft failure to be a complex phenomenon involving different components of the immune system, mainly driven by the IFNγ pathway. We observed a significant modulation of IL7, IL8, IL18, IL27, CCL2, CCL5 (Rantes), CCL7, CCL20 (MIP3a), CCL24 (Eotaxin2), and CXCL11 in patients experiencing graft failure, as compared to matched patients not developing this complication. For some of these factors, the difference was already present at the time of infusion of the graft, thus allowing early risk stratification. Moreover, these cytokines/chemokines could represent possible targets, providing the rationale for exploring new therapeutic/preventive strategies.

K Schlüns,  William Kieper,  Leo Lefrancois … (2000)
The naïve and memory T lymphocyte pools are maintained through poorly understood homeostatic mechanisms that may include signaling via cytokine receptors. We show that interleukin-7 (IL-7) plays multiple roles in regulating homeostasis of CD8+ T cells. We found that IL-7 was required for homeostatic expansion of naïve CD8+ and CD4+ T cells in lymphopenic hosts and for CD8+ T cell survival in normal hosts. In contrast, IL-7 was not necessary for growth of CD8+ T cells in response to a virus infection but was critical for generating T cell memory. Up-regulation of Bcl-2 in the absence of IL-7 signaling was impaired after activation in vivo. Homeostatic proliferation of memory cells was also partially dependent on IL-7. These results point to IL-7 as a pivotal cytokine in T cell homeostasis.

Carlee Moser,  Marcus Koch,  Michael Myers … (1998)
T cells infiltrating inflammatory sites are usually of the activated/memory type. The precise mechanism for the positioning of these cells within tissues is unclear. Adhesion molecules certainly play a role; however, the intricate control of cell migration appears to be mediated by numerous chemokines and their receptors. Particularly important chemokines for activated/memory T cells are the CXCR3 ligands IP-10 and Mig and the CCR5 ligands RANTES, macrophage inflammatory protein-1alpha, and macrophage inflammatory protein-1beta. We raised anti-CXCR3 mAbs and were able to detect high levels of CXCR3 expression on activated T cells. Surprisingly, a proportion of circulating blood T cells, B cells, and natural killer cells also expressed CXCR3. CCR5 showed a similar expression pattern as CXCR3, but was expressed on fewer circulating T cells. Blood T cells expressing CXCR3 (and CCR5) were mostly CD45RO+, and generally expressed high levels of beta1 integrins. This phenotype resembled that of T cells infiltrating inflammatory lesions. Immunostaining of T cells in rheumatoid arthritis synovial fluid confirmed that virtually all such T cells expressed CXCR3 and approximately 80% expressed CCR5, representing high enrichment over levels of CXCR3+ and CCR5+ T cells in blood, 35 and 15%, respectively. Analysis by immunohistochemistry of various inflamed tissues gave comparable findings in that virtually all T cells within the lesions expressed CXCR3, particularly in perivascular regions, whereas far fewer T cells within normal lymph nodes expressed CXCR3 or CCR5. These results demonstrate that the chemokine receptor CXCR3 and CCR5 are markers for T cells associated with certain inflammatory reactions, particularly TH-1 type reactions. Moreover, CXCR3 and CCR5 appear to identify subsets of T cells in blood with a predilection for homing to these sites.

Keith Hunter (2005)
Understanding the factors that influence T helper 1 (T(H)1)- and T(H)2-cell responses has been one of the main focuses of immunology for almost 20 years. Whereas the central role of interleukin-12 (IL-12) in the generation of T(H)1 cells has long been appreciated, subsequent studies indicated that IL-23 and IL-27, two cytokines that are closely related to IL-12, also regulate T(H)1-cell responses. However, as discussed in this article, it is now recognized that the ability of IL-23 to stimulate a unique T-cell subset to produce IL-17 has a dominant role in autoimmune inflammation. By contrast, IL-27 has a role in limiting the intensity and duration of adaptive immune responses.

This article was submitted to Alloimmunity and Transplantation, a section of the journal Frontiers in Immunology