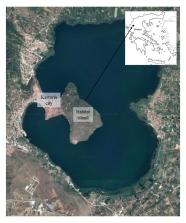 Lake Kastoria is one of the potentially “ancient” Balkan lakes that has a great environmental importance and ecological value, attracts high touristic interest and is under various anthropogenic pressures. It belongs to a Natura 2000 Special Protection Area and a Site of Community Interest. The city of Kastoria is located at the western part of the lake and just next to it, towards the centre of the lake, is a peninsula, a habitat island. In the framework of research concerning the flora of lake islands of Greece, one of the main objectives of the present study is to fill a gap concerning plant species richness of the habitat island within the protected Lake Kastoria, which is surrounded by the lake except for its north-western part where the border of the city of Kastoria is located. Floristic analysis of the habitat island of Lake Kastoria is in large measure accounted, concerning chorology with emphasis on Balkan endemics (8.7%), life forms, by hemicryptophytes (36.1%), therophytes (33.2%), phanerophytes (16.4%) and geophytes (10.9%) and, for habitats, by taxa preferring agricultural and ruderal ones (53.3%). Another objective is to compare its floristic composition to the one of the island within the protected urban Lake Pamvotis - one of the very few lake islands in Greece - focusing on the influence of urbanisation. The α- and β- diversity are measured in order to reveal floristic differences. Beta diversity partitioning in turnover and nestedness showed that the β-diversity is mostly expressed as compositional turnover. The role of the society in combination with long-term programmes for the study of plant species richness, functional diversity and patterns of species assemblages over time are necessary for the effective management and protection of protected areas, including lake insular areas.

Dominance and Diversity in Land Plant Communities: Numerical relations of species express the importance of competition in community function and evolution.

Gary R. Whittaker (1965)
Most plant communities consist of several or many species which compete for light, water, and nutrients. Species in a given community may be ranked by their relative success in competition; productivity seems to be the best measure of their success or importance in the community. Curves of decreasing productivity connect the few most important species (the dominants) with a larger number of species of intermediate importance (whose number primarily determines the community's diversity or richness in species) and a smaller number of rare species. These curves are of varied forms and are believed to express different patterns of competition and niche differentiation in communities. It is probably true of plants, as of animals, that no two species in a stable community occupy the same niche. Evolution of niche differentiation makes possible the occurrence together of many plant species which are partial, rather than direct, competitors. Species tend to evolve also toward habitat differentiation, toward scattering of their centers of maximum population density in relation to environmental gradients, so that few species are competing with one another in their population centers. Evolution of both niche and habitat differentiation permits many species to exist together in communities as partial competitors, with distributions broadly and continuously overlapping, forming the landscape's many intergrading communities.