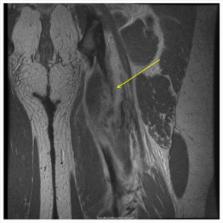 Muscle injuries are extremely common in athletes and often produce pain, dysfunction, and the inability to return to practice or competition. Appropriate diagnosis and management can optimize recovery and minimize time to return to play.

Contemporary papers, both basic science and clinical medicine, that investigate muscle healing were reviewed. A Medline/PubMed search inclusive of years 1948 to 2012 was performed.

Diagnosis can usually be made according to history and physical examination for most injuries. Although data are limited, initial conservative management emphasizing the RICE principles and immobilization of the extremity for several days for higher grade injuries are typically all that is required. Injection of corticosteroids may clinically enhance function after an acute muscle strain. Additional adjunctive treatments (nonsteroidal anti-inflammatory drugs, platelet-rich plasma, and others) to enhance muscle healing and limit scar formation show promise but need additional data to better define their roles.

Conservative treatment recommendations will typically lead to successful outcomes after a muscle injury. There is limited evidence to support most adjunctive treatments.

T Suda,  V Rosen,  T Kawaguchi … (1994)
The implantation of bone morphogenetic protein (BMP) into muscular tissues induces ectopic bone formation at the site of implantation. To investigate the mechanism underlying this process, we examined whether recombinant bone morphogenetic protein-2 (BMP-2) converts the differentiation pathway of the clonal myoblastic cell line, C2C12, into that of osteoblast lineage. Incubating the cells with 300 ng/ml of BMP- 2 for 6 d almost completely inhibited the formation of the multinucleated myotubes expressing troponin T and myosin heavy chain, and induced the appearance of numerous alkaline phosphatase (ALP)- positive cells. BMP-2 dose dependently induced ALP activity, parathyroid hormone (PTH)-dependent 3',5'-cAMP production, and osteocalcin production at concentrations above 100 ng/ml. The concentration of BMP-2 required to induce these osteoblastic phenotypes was the same as that required to almost completely inhibit myotube formation. Incubating primary muscle cells with 300 ng/ml of BMP-2 for 6 d also inhibited myotube formation, whereas induced ALP activity and osteocalcin production. Incubation with 300 ng/ml of BMP-2 suppressed the expression of mRNA for muscle creatine kinase within 6 h, whereas it induced mRNA expression for ALP, PTH/PTH-related protein (PTHrP) receptors, and osteocalcin within 24-48 h. BMP-2 completely inhibited the expression of myogenin mRNA by day 3. By day 3, BMP-2 also inhibited the expression of MyoD mRNA, but it was transiently stimulated 12 h after exposure to BMP-2. Expression of Id-1 mRNA was greatly stimulated by BMP-2. When C2C12 cells pretreated with BMP-2 for 6 d were transferred to a colony assay system in the absence of BMP-2, more than 84% of the colonies generated became troponin T-positive and ALP activity disappeared. TGF-beta 1 also inhibited myotube formation in C2C12 cells, and suppressed the expression of myogenin and MyoD mRNAs without inducing that of Id-1 mRNA. However, no osteoblastic phenotype was induced by TGF-beta 1 in C2C12 cells. TGF-beta 1 potentiated the inhibitory effect of BMP-2 on myotube formation, whereas TGF-beta 1 reduced ALP activity and osteocalcin production induced by BMP-2 in C2C12 cells. These results indicate that BMP-2 specifically converts the differentiation pathway of C2C12 myoblasts into that of osteoblast lineage cells, but that the conversion is not heritable.

Identification of progenitor cells that contribute to heterotopic skeletogenesis.

Use of autologous platelet-rich plasma to treat muscle strain injuries.

David Hinton,  Mark W Hammond,  Cynthia Curl … (2009)
Standard nonoperative therapy for acute muscle strains usually involves short-term rest, ice, and nonsteroidal anti-inflammatory medications, but there is no clear consensus on how to accelerate recovery. Local delivery of platelet-rich plasma to injured muscles hastens recovery of function. Controlled laboratory study. In vivo, the tibialis anterior muscles of anesthetized Sprague-Dawley rats were injured by a single (large strain) lengthening contraction or multiple (small strain) lengthening contractions, both of which resulted in a significant injury. The tibialis anterior either was injected with platelet-rich plasma, was injected with platelet-poor plasma as a sham treatment, or received no treatment. Both injury protocols yielded a similar loss of force. The platelet-rich plasma only had a beneficial effect at 1 time point after the single contraction injury protocol. However, platelet-rich plasma had a beneficial effect at 2 time points after the multiple contraction injury protocol and resulted in a faster recovery time to full contractile function. The sham injections had no effect compared with no treatment. Local delivery of platelet-rich plasma can shorten recovery time after a muscle strain injury in a small-animal model. Recovery of muscle from the high-repetition protocol has already been shown to require myogenesis, whereas recovery from a single strain does not. This difference in mechanism of recovery may explain why platelet-rich plasma was more effective in the high-repetition protocol, because platelet-rich plasma is rich in growth factors that can stimulate myogenesis. Because autologous blood products are safe, platelet-rich plasma may be a useful product in clinical treatment of muscle injuries.