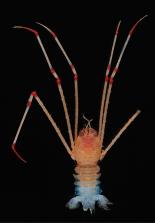 Hendersonida parvirostris sp. nov. is described from Papua New Guinea. The new species can be distinguished from the only other species of the genus, H. granulata (Henderson, 1885), by the fewer spines on the dorsal carapace surface, the shape of the rostrum and supraocular spines, the antennal peduncles, and the length of the walking legs. Pairwise genetic distances estimated using the 16S rRNA and COI DNA gene fragments indicated high levels of sequence divergence between the new species and H. granulata . Phylogenetic analyses, however, recovered both species as sister species, supporting monophyly of the genus.

Rapid radiation and cryptic speciation in squat lobsters of the genus Munida (Crustacea, Decapoda) and related genera in the South West Pacific: molecular and morphological evidence.

Enrique Macpherson,  Annie Machordom (2004)
Squat lobsters (genus Munida and related genera) are among the most diverse taxa of western Pacific crustaceans, though several features of their biology and phylogenetic relationships are unknown. This paper reports an extensive phylogenetic analysis based on mitochondrial DNA sequences (cytochrome c oxidase subunit I and 16S rRNA) and the morphology of 72 species of 12 genera of western Pacific squat lobsters. Our phylogenetic reconstruction using molecular data supports the recent taxonomic splitting of the genus Munida into several genera. Excluding one species (M. callista), the monophyly of the genus Munida was supported by Bayesian analysis of the molecular data. Three moderately diverse genera (Onconida, Paramunida, and Raymunida) also appeared monophyletic, both according to morphological and molecular data, always with high support. However, other genera (Crosnierita and Agononida) seem to be para- or polyphyletic. Three new cryptic species were identified in the course of this study. It would appear that the evolution of this group was marked by rapid speciation and stasis, or certain constraints, in its morphological evolution.