Synergistic Effect of Colistin and Rifampin Against Multidrug Resistant Acinetobacter baumannii: A Systematic Review and Meta-Analysis 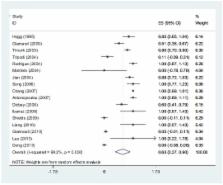 The existence of infections caused by multidrug resistant (MDR) Acinetobacter baumannii is a growing problem because of the difficulty to treat them. We examined the published literature and focused our analysis on the investigation of the synergism of colistin and rifampin against MDR A. baumannii isolates via systematic review and meta-analysis. A systematic literature search was performed using the following 4 databases (PubMed, Scopus, EMBASE and ISI Web of Sciences). The related articles were evaluated during the period from December 2014 to January 2015. Information based on resistance and sensitivity to antibiotics, the minimum inhibitory concentration and the effects of two antibiotics on each other including synergism, antagonism, relative synergism and additive antagonism were extracted. A meta-analysis of 17 studies including 448 samples was brought into process and 2% (95% CI 0-4%) and 72% (95% CI 56-89%) resistance to colistin and rifampin were observed, respectively. 42% of all isolates showed MIC = 4 µg/ml (95% CI 14-69%) to rifampin and 30% MIC= 2 µg/ml to colistin (95% CI 3.8-78%). MIC 50 and MIC 90 for both rifampin and colistin were 2 µg/ml and 4 µg/ml, respectively. 63% of the strains demonstrated synergy (95% CI 37-90%), 7% were highlighted as relative synergism (95% CI 0.0- 13%), 3% showed an additive effect (95% CI -0.0-7%) and 14% were indifferent (95% CI 6-23%). The antagonistic effect was not observed in this combination. Synergy rates of time-kill assay in rifampin and colistin combinations were generally higher than those of check bored microdilution and E-test method. The results demonstrated that the combination therapy could be more useful when compared to monotherapy and that this strategy might reduce the resistance rate to rifampin in MDR A. baumannii isolates.

Antonio Alci Barone,  Mercedes Santos-Vivas,  Lisa A. Levin … (1999)
Sixty nosocomial infections caused by Pseudomonas aeruginosa and Acinetobacter baumannii resistant to aminoglycosides, cephalosporins, quinolones, penicillins, monobactams, and imipenem were treated with colistin (one patient had two infections that are included as two different cases). The infections were pneumonia (33% of patients), urinary tract infection (20%), primary bloodstream infection (15%), central nervous system infection (8%), peritonitis (7%), catheter-related infection (7%), and otitis media (2%). A good outcome occurred for 35 patients (58%), and three patients died within the first 48 hours of treatment. The poorest results were observed in cases of pneumonia: only five (25%) of 20 had a good outcome. A good outcome occurred for four of five patients with central nervous system infections, although no intrathecal treatment was given. The main adverse effect of treatment was renal failure; 27% of patients with initially normal renal function had renal failure, and renal function worsened in 58% of patients with abnormal baseline creatinine levels. Colistin may be a good therapeutic option for the treatment of severe infections caused by multidrug-resistant P. aeruginosa and A. baumannii.

In vitro activities of non-traditional antimicrobials alone or in combination against multidrug-resistant strains of Pseudomonas aeruginosa and Acinetobacter baumannii isolated from intensive care units.

Muge Demirbilek,  Betül Karaman,  Fusun-Kamber Can … (2006)
The aim of this study was to assess the in vitro activity of a number of non-traditional antibiotics (colistin, azithromycin, doxycycline and rifampicin) against multidrug-resistant (MDR) strains of Pseudomonas aeruginosa and Acinetobacter baumannii isolated from Intensive Care Units (ICUs). We also used the checkerboard method to determine whether combinations of colistin with another non-traditional antibiotic or meropenem act synergistically against these strains. Thirty-five P. aeruginosa and 25 A. baumannii strains that were found to be MDR were included the study. Isolates were collected from the specimens of patients in ICUs from 2001 to 2003. All isolates were identified by standard methods and stored at -20 degrees C until use. Antibiotic powders of azithromycin, doxycycline, rifampicin, meropenem and colistin were obtained from their manufacturers. Minimum inhibitory concentrations (MICs) were determined by the agar dilution method on Mueller-Hinton agar. Five strains of A. baumannii and five strains of P. aeruginosa, all of which had different MIC values for colistin, were selected for the synergy study using the checkerboard titration method. The susceptibility results for doxycycline and meropenem were interpreted according to National Committee for Clinical Laboratory Standards guidelines. The susceptibility breakpoints for colistin and rifampicin were established as 4 mg/L and 2 mg/L, respectively, based on previous studies. Pseudomonas aeruginosa ATCC 27853 and Escherichia coli ATCC 25922 were used as control strains. Testing against the P. aeruginosa strains revealed high MIC50 values for all the drugs except colistin. Doxycycline and colistin were both effective against the A. baumannii strains, with high susceptibility rates of 92% and 100%, respectively. Azithromycin had a high MIC50 value against these strains, whilst rifampicin had a moderate effect (susceptibility rate 64%). The combination of colistin and rifampicin was fully synergistic against four A. baumannii and two P. aeruginosa strains. Combinations of colistin with meropenem and of colistin with azithromycin each showed synergistic activity against three A. baumannii isolates, whilst the same combinations resulted in generally additive or indifferent effects against P. aeruginosa strains. The colistin and doxycycline combination was generally partially synergistic or additive against all the isolates. MDR strains of P. aeruginosa and A. baumannii, which cause nosocomial infections with an increasing ratio in recent years, have limited treatment options. According to our in vitro study results, non-traditional antibiotics such as doxycycline and colistin can be an alternative for the treatment of infections caused by these strains. Combinations of colistin with non-traditional antibiotics or meropenem could be promising alternatives for the treatment of infections due to MDR strains of A. baumannii and P. aeruginosa.

This is an open access article distributed under the terms of the Creative Commons Attribution 4.0 International Public License (CC-BY 4.0), a copy of which is available at: https://creativecommons.org/licenses/by/4.0/legalcode. This license permits unrestricted use, distribution, and reproduction in any medium, provided the original author and source are credited.