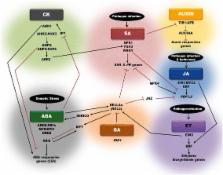 Being sessile organisms, plants are often exposed to a wide array of abiotic and biotic stresses. Abiotic stress conditions include drought, heat, cold and salinity, whereas biotic stress arises mainly from bacteria, fungi, viruses, nematodes and insects. To adapt to such adverse situations, plants have evolved well-developed mechanisms that help to perceive the stress signal and enable optimal growth response. Phytohormones play critical roles in helping the plants to adapt to adverse environmental conditions. The elaborate hormone signaling networks and their ability to crosstalk make them ideal candidates for mediating defense responses.

Recent research findings have helped to clarify the elaborate signaling networks and the sophisticated crosstalk occurring among the different hormone signaling pathways. In this review, we summarize the roles of the major plant hormones in regulating abiotic and biotic stress responses with special focus on the significance of crosstalk between different hormones in generating a sophisticated and efficient stress response. We divided the discussion into the roles of ABA, salicylic acid, jasmonates and ethylene separately at the start of the review. Subsequently, we have discussed the crosstalk among them, followed by crosstalk with growth promoting hormones (gibberellins, auxins and cytokinins). These have been illustrated with examples drawn from selected abiotic and biotic stress responses. The discussion on seed dormancy and germination serves to illustrate the fine balance that can be enforced by the two key hormones ABA and GA in regulating plant responses to environmental signals.

The intricate web of crosstalk among the often redundant multitudes of signaling intermediates is just beginning to be understood. Future research employing genome-scale systems biology approaches to solve problems of such magnitude will undoubtedly lead to a better understanding of plant development. Therefore, discovering additional crosstalk mechanisms among various hormones in coordinating growth under stress will be an important theme in the field of abiotic stress research. Such efforts will help to reveal important points of genetic control that can be useful to engineer stress tolerant crops.

Óscar Lorenzo, Jose M Chico, José Sánchez-Serrano … (2004)
In spite of the importance of jasmonates (JAs) as plant growth and stress regulators, the molecular components of their signaling pathway remain largely unknown. By means of a genetic screen that exploits the cross talk between ethylene (ET) and JAs, we describe the identification of several new loci involved in JA signaling and the characterization and positional cloning of one of them, JASMONATE-INSENSITIVE1 (JAI1/JIN1). JIN1 encodes AtMYC2, a nuclear-localized basic helix-loop-helix-leucine zipper transcription factor, whose expression is rapidly upregulated by JA, in a CORONATINE INSENSITIVE1-dependent manner. Gain-of-function experiments confirmed the relevance of AtMYC2 in the activation of JA signaling. AtMYC2 differentially regulates the expression of two groups of JA-induced genes. The first group includes genes involved in defense responses against pathogens and is repressed by AtMYC2. Consistently, jin1 mutants show increased resistance to necrotrophic pathogens. The second group, integrated by genes involved in JA-mediated systemic responses to wounding, is activated by AtMYC2. Conversely, Ethylene-Response-Factor1 (ERF1) positively regulates the expression of the first group of genes and represses the second. These results highlight the existence of two branches in the JA signaling pathway, antagonistically regulated by AtMYC2 and ERF1, that are coincident with the alternative responses activated by JA and ET to two different sets of stresses, namely pathogen attack and wounding.

Jian-Kang Zhu (2002)
Salt and drought stress signal transduction consists of ionic and osmotic homeostasis signaling pathways, detoxification (i.e., damage control and repair) response pathways, and pathways for growth regulation. The ionic aspect of salt stress is signaled via the SOS pathway where a calcium-responsive SOS3-SOS2 protein kinase complex controls the expression and activity of ion transporters such as SOS1. Osmotic stress activates several protein kinases including mitogen-activated kinases, which may mediate osmotic homeostasis and/or detoxification responses. A number of phospholipid systems are activated by osmotic stress, generating a diverse array of messenger molecules, some of which may function upstream of the osmotic stress-activated protein kinases. Abscisic acid biosynthesis is regulated by osmotic stress at multiple steps. Both ABA-dependent and -independent osmotic stress signaling first modify constitutively expressed transcription factors, leading to the expression of early response transcriptional activators, which then activate downstream stress tolerance effector genes.