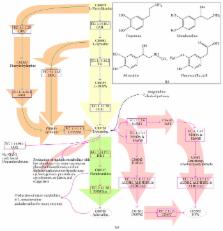 Dopamine (DA), a neurotransmitter in the central nervous system (CNS), has modulatory functions at the systemic level. The peripheral and central nervous systems have independent dopaminergic system (DAS) that share mechanisms and molecular machinery. In the past century, experimental evidence has accumulated on the proteins knowledge that is involved in the synthesis, reuptake, and transportation of DA in leukocytes and the differential expression of the D1- like (D1R and D5R) and D2- like receptors (D2R, D3R, and D4R). The expression of these components depends on the state of cellular activation and the concentration and time of exposure to DA. Receptors that are expressed in leukocytes are linked to signaling pathways that are mediated by changes in cAMP concentration, which in turn triggers changes in phenotype and cellular function. According to the leukocyte lineage, the effects of DA are associated with such processes as respiratory burst, cytokine and antibody secretion, chemotaxis, apoptosis, and cytotoxicity. In clinical conditions such as schizophrenia, Parkinson disease, Tourette syndrome, and multiple sclerosis (MS), there are evident alterations during immune responses in leukocytes, in which changes in DA receptor density have been observed. Several groups have proposed that these findings are useful in establishing clinical status and clinical markers.

Alexander Berger,  Michael P. Murphy,  Nicholas Farber (1998)
In addition to CD4, the human immunodeficiency virus (HIV) requires a coreceptor for entry into target cells. The chemokine receptors CXCR4 and CCR5, members of the G protein-coupled receptor superfamily, have been identified as the principal coreceptors for T cell line-tropic and macrophage-tropic HIV-1 isolates, respectively. The updated coreceptor repertoire includes numerous members, mostly chemokine receptors and related orphans. These discoveries provide a new framework for understanding critical features of the basic biology of HIV-1, including the selective tropism of individual viral variants for different CD4+ target cells and the membrane fusion mechanism governing virus entry. The coreceptors also provide molecular perspectives on central puzzles of HIV-1 disease, including the selective transmission of macrophage-tropic variants, the appearance of T cell line-tropic variants in many infected persons during progression to AIDS, and differing susceptibilities of individuals to infection and disease progression. Genetic findings have yielded major insights into the in vivo roles of individual coreceptors and their ligands; of particular importance is the discovery of an inactivating mutation in the CCR5 gene which, in homozygous form, confers strong resistance to HIV-1 infection. Beyond providing new perspectives on fundamental aspects of HIV-1 transmission and pathogenesis, the coreceptors suggest new avenues for developing novel therapeutic and preventative strategies to combat the AIDS epidemic.

Margaret M. Esiri,  Manuel A. Friese,  Jackie Palace … (2007)
Recent findings in the animal model for multiple sclerosis (MS), experimental autoimmune encephalomyelitis, implicate a novel CD4+ T-cell subset (TH17), characterized by the secretion of interleukin-17 (IL-17), in disease pathogenesis. To elucidate its role in MS, brain tissues from patients with MS were compared to controls. We detected expression of IL-17 mRNA (by in situ hybridization) and protein (by immunohistochemistry) in perivascular lymphocytes as well as in astrocytes and oligodendrocytes located in the active areas of MS lesions. Further, we found a significant increase in the number of IL-17+ T cells in active rather than inactive areas of MS lesions. Specifically, double immunofluorescence showed that IL-17 immunoreactivity was detected in 79% of T cells in acute lesions, 73% in active areas of chronic active lesions, but in only 17% of those in inactive lesions and 7% in lymph node control tissue. CD8+, as well as CD4+, T cells were equally immunostained for IL-17 in MS tissues. Interestingly, and in contrast to lymph node T cells, no perivascular T cells showed FoxP3 expression, a marker of regulatory T cells, at any stage of MS lesions. These observations suggest an enrichment of both IL-17+CD4+ and CD8+ T cells in active MS lesions as well as an important role for IL-17 in MS pathogenesis, with some remarkable differences from the experimental autoimmune encephalomyelitis model.