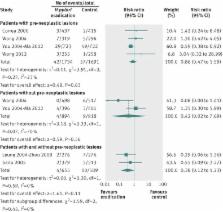 Objectives To determine whether searching for Helicobacter pylori and treating with eradication therapy leads to a reduction in incidence of gastric cancer among healthy asymptomatic infected individuals.

Data sources Medline, Embase, and the Cochrane central register of controlled trials were searched through to December 2013. Conference proceedings between 2001 and 2013 were hand searched. A recursive search was performed with bibliographies of relevant studies. There were no language restrictions.

Eligibility criteria for selecting studies Randomised controlled trials examining the effect of at least seven days of eradication therapy on subsequent occurrence of gastric cancer in adults who tested positive for Helicobacter pylori but otherwise healthy and asymptomatic were eligible. The control arm had to receive placebo or no treatment. Subjects had to be followed for ≥2 years.

Main outcome measures Primary outcome, defined a priori, was the effect of eradication therapy on the subsequent occurrence of gastric cancer expressed as a relative risk of gastric cancer with 95% confidence intervals.

Results The search strategy identified 1560 citations, of which six individual randomised controlled trials were eligible. Fifty one (1.6%) gastric cancers occurred among 3294 individuals who received eradication therapy versus 76 (2.4%) in 3203 control subjects (relative risk 0.66, 95% confidence interval 0.46 to 0.95), with no heterogeneity between studies (I 2=0%, P=0.60). If the benefit of eradication therapy was assumed to persist lifelong the number needed to treat was as low as 15 for Chinese men and as high as 245 for US women.

Conclusions These data provide limited, moderate quality evidence that searching for and eradicating H pylori reduces the incidence of gastric cancer in healthy asymptomatic infected Asian individuals, but these data cannot necessarily be extrapolated to other populations.

Joshua Davis, Vincent He, Nicholas Anstey … (2014)
Background Sepsis is a leading cause of death in intensive care units and is increasing in incidence. Current trials of novel therapeutic approaches for sepsis focus on 28-day mortality as the primary outcome measure, but excess mortality may extend well beyond this time period. Methods We used relative survival analysis to examine excess mortality in a cohort of 1,028 patients admitted to a tertiary referral hospital with sepsis during 2007–2008, over the first 5 years of follow up. Expected survival was estimated using the Ederer II method, using Australian life tables as the reference population. Cumulative and interval specific relative survival were estimated by age group, sex, sepsis severity and Indigenous status. Results Patients were followed for a median of 4.5 years (range 0–5.2). Of the 1028 patients, the mean age was 46.9 years, 52% were male, 228 (22.2%) had severe sepsis and 218 (21%) died during the follow up period. Mortality based on cumulative relative survival exceeded that of the reference population for the first 2 years post admission in the whole cohort and for the first 3 years in the subgroup with severe sepsis. Independent predictors of mortality over the whole follow up period were male sex, Indigenous Australian ethnicity, older age, higher Charlson Comorbidity Index, and sepsis-related organ dysfunction at presentation. Conclusions The mortality rate of patients hospitalised with sepsis exceeds that of the general population until 2 years post admission. Efforts to improve outcomes from sepsis should examine longer term outcomes than the traditional primary endpoints of 28-day and 90-day mortality.

Qingqing Lin, Erwin London (2014)
Lipid asymmetry, the difference in lipid distribution across the lipid bilayer, is one of the most important features of eukaryotic cellular membranes. However, commonly used model membrane vesicles cannot provide control of lipid distribution between inner and outer leaflets. We recently developed methods to prepare asymmetric model membrane vesicles, but facile incorporation of a highly controlled level of cholesterol was not possible. In this study, using hydroxypropyl-α-cyclodextrin based lipid exchange, a simple method was devised to prepare large unilamellar model membrane vesicles that closely resemble mammalian plasma membranes in terms of their lipid composition and asymmetry (sphingomyelin (SM) and/or phosphatidylcholine (PC) outside/phosphatidylethanolamine (PE) and phosphatidylserine (PS) inside), and in which cholesterol content can be readily varied between 0 and 50 mol%. We call these model membranes “artificial plasma membrane mimicking” (“PMm”) vesicles. Asymmetry was confirmed by both chemical labeling and measurement of the amount of externally-exposed anionic lipid. These vesicles should be superior and more realistic model membranes for studies of lipid-lipid and lipid-protein interaction in a lipid environment that resembles that of mammalian plasma membranes.

Efficacy and Safety of Endovascular Treatment versus Intravenous Thrombolysis for Acute Ischemic Stroke: A Meta-Analysis of Randomized Controlled Trials

Chao-Chang Lin, Nan Li, Kang-Yi Wang … (2013)
Background and Purpose Although endovascular therapy (ET) is increasingly used in patients with moderate to severe acute ischemic stroke, its efficacy and safety remains controversial. We performed a meta-analysis aiming to compare the benefits and safety of endovascular treatment and intravenous thrombolysis in the treatment of acute ischemic stroke. Methods We systematically searched PubMed, Embase, Science direct and Springer unitil July, 2013. The primary outcomes included good outcome (mRS ≤ 2) and excellent outcome (mRS ≤ 1) at 90 days or at trial end point. Secondary outcomes were occurrence of symptomatic hemorrhage and all-cause mortality. Results Using a prespecified search strategy, 5 RCTs with 1106 patients comparing ET and intravenous thrombolysis (IVT) were included in the meta-analysis. ET and IVT were associated with similar good (43.06% vs 41.78%; OR=1.14; 95% CI, 0.77 to 1.69; P=0.52;) and excellent (30.43% vs 30.42%; OR=1.05; 95% CI, 0.80 to 1.38; P=0.72;) outcome. For additional end points, ET was not associated with increased occurrence of symptomatic hemorrhage (6.25% vs. 6.22%; OR=1.03; 95% CI, 0.62 to 1.69; P=0.91;), or all-cause mortality (18.45% vs. 17.35%; OR=1.00; 95% CI, 0.73 to 1.39; P=0.99;). Conclusions Formal meta-analysis indicates that there are similar safety outcomes and functional independence with endovascular therapy and intravenous thrombolysis for acute ischemic stroke.

This is an Open Access article distributed in accordance with the Creative Commons Attribution Non Commercial (CC BY-NC 3.0) license, which permits others to distribute, remix, adapt, build upon this work non-commercially, and license their derivative works on different terms, provided the original work is properly cited and the use is non-commercial. See: http://creativecommons.org/licenses/by-nc/3.0/.