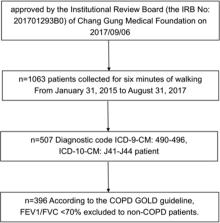 Chronic Obstructive Pulmonary Disease (COPD) is a common chronic respiratory disease that in the long term may develop into respiratory failure or even cause death and may coexist with other diseases. Over time, it may incur huge medical expenses, resulting in a heavy socio-economy burden. The BODE (Body mass index, airflow Obstruction, Dyspnea, and Exercise capacity) index is a predictor of the number and severity of acute exacerbations of COPD. This study focused on the correlation between the BODE index, comorbidity, and healthcare resource utilization in COPD.

This is a retrospective study of clinical outcomes of COPD patients with complete BODE index data in our hospital from January 2015 to December 2016. Based on the patients’ medical records in our hospital’s electronic database from January 1, 2015 to August 31, 2017, we analyzed the correlation between BODE index, Charlson comorbidity index (CCI), and medical resources.

This study demonstrates the value of examining the BODE index and comorbidities that can predict healthcare resource utilization in COPD.

Standards for the diagnosis and treatment of patients with COPD: a summary of the ATS/ERS position paper

The economic burden of COPD.

Sean D Sullivan,  Scott Ramsey,  Todd Lee (2000)
COPD is one of the leading causes of morbidity and mortality worldwide and imparts a substantial economic burden on individuals and society. Despite the intense interest in COPD among clinicians and researchers, there is a paucity of data on health-care utilization, costs, and social burden in this population. The total economic costs of COPD morbidity and mortality in the United States were estimated at $23.9 billion in 1993. Direct treatments for COPD-related illness accounted for $14.7 billion, and the remaining $9.2 billion were indirect morbidity and premature mortality estimated as lost future earnings. Similar data from another US study suggest that 10% of persons with COPD account for > 70% of all medical care costs. International studies of trends in COPD-related hospitalization indicate that although the average length of stay has decreased since 1972, admissions per 1,000 persons per year for COPD have increased in all age groups > 45 years of age. These trends reflect population aging, smoking patterns, institutional factors, and treatment practices.