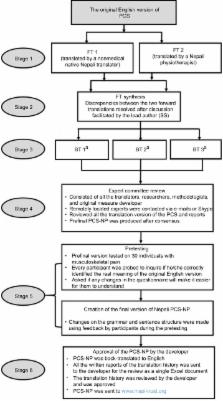 Pain catastrophizing is an exaggerated negative cognitive response related to pain. It is commonly assessed using the Pain Catastrophizing Scale (PCS). Translation and validation of the scale in a new language would facilitate cross-cultural comparisons of the role that pain catastrophizing plays in patient function.

The aim of this study was to translate and culturally adapt the PCS into Nepali (Nepali version of PCS [PCS-NP]) and evaluate its clinimetric properties.

We translated, cross-culturally adapted, and performed an exploratory factor analysis (EFA) of the PCS-NP in a sample of adults with chronic pain (N=143). We then confirmed the resulting factor model in a separate sample (N=272) and compared this model with 1-, 2-, and 3-factor models previously identified using confirmatory factor analyses (CFAs). We also computed internal consistencies, test–retest reliabilities, standard error of measurement (SEM), minimal detectable change (MDC), and limits of agreement with 95% confidence interval (LOA 95%) of the PCS-NP scales. Concurrent validity with measures of depression, anxiety, and pain intensity was assessed by computing Pearson’s correlation coefficients.

The PCS-NP was comprehensible and culturally acceptable. We extracted a two-factor solution using EFA and confirmed this model using CFAs in the second sample. Adequate fit was also found for a one-factor model and different two- and three-factor models based on prior studies. The PCS-NP scores evidenced excellent reliability and temporal stability, and demonstrated validity via moderate-to-strong associations with measures of depression, anxiety, and pain intensity. The SEM and MDC for the PCS-NP total score were 2.52 and 7.86, respectively (range of PCS scores 0–52). LOA 95% was between −15.17 and +16.02 for the total PCS-NP scores.

The PCS-NP is a valid and reliable instrument to assess pain catastrophizing in Nepalese individuals with chronic pain.

Factor structure, reliability, and validity of the Pain Catastrophizing Scale.

Essam A Osman,  T. J. Jones,  W Hauptmann … (1997)
The Pain Catastrophizing Scale (PCS; Sullivan et al., Psychol. Assess. 7, 524-532, 1995) has recently been developed to assess three components of catastrophizing: rumination, magnification, and helplessness. We conducted three studies to evaluate the factor structure, reliability, and validity of the PCS. In Study I, we conducted principal-components analysis with oblique rotation to replicate the three factors of the PCS. Gender differences on the original PCS subscales were also analyzed. In Study II, we conducted confirmatory factor analyses to evaluate the adequacy of fit of four alternative models. We also evaluated evidence for concurrent and discriminant validity. In Study III, we evaluated the ability of the PCS and subscales to differentiate between the responses of clinic (students seeking treatment) and nonclinic undergraduate samples. Also, in the clinic sample, we evaluated evidence of concurrent and predictive validity for the PCS. The internal consistency reliability indices for the total PCS and subscales were examined in all three studies. Limitations and future directions are discussed.