Postprandial insulin resistance as an early predictor of cardiovascular risk 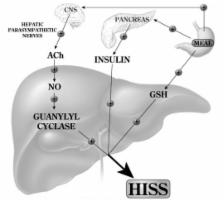 Insulin resistance, hyperglycemia, hyperinsulinemia, hyperlipidemia and oxidative stress are risk factors related to cardiovascular diseases including congestive heart failure, myocardial infarction, ventricular hypertrophy, endothelial nitric oxide impairment in systemic blood vessels and the heart, atherosclerosis, and hypercoagulability of blood. The traditional focus on insulin sensitivity and blood levels of markers of risk determined in the fasted state is inconsistent with the large volume of recent data that indicates that the metabolic defect in the pre-diabetic and diabetic condition relates more strongly to postprandial deficiency than to the fasting state. Risk factors for adverse cardiovascular events can be detected in the pre-diabetic insulin-resistant subject based upon the metabolic response to a test meal even in the absence of altered fasting parameters. The normal response to a mixed meal includes a doubling of insulin action secondary to insulin-induced release of a putative hepatic insulin sensitizing substance (HISS) that acts selectively on skeletal muscle. HISS is released only in the fed state and accounts for meal-induced insulin sensitization. Blockade of HISS release leads to a condition referred to as HISS-dependent insulin resistance, which is suggested as the primary postprandial metabolic defect, accounting for postprandial hyperglycemia, hyperinsulinemia, hyperlipidemia, and increased oxidative stress in the pre-diabetic and diabetic condition. HISS-dependent insulin resistance represents a novel hypothesis and suggests a new diagnostic and therapeutic target.

A-G Howard,  R D'Agostino,  L Mykkänen … (2000)
Inflammation has been suggested as a risk factor for the development of atherosclerosis. Recently, some components of the insulin resistance syndrome (IRS) have been related to inflammatory markers. We hypothesized that insulin insensitivity, as directly measured, may be associated with inflammation in nondiabetic subjects. We studied the relation of C-reactive protein (CRP), fibrinogen, and white cell count to components of IRS in the nondiabetic population of the Insulin Resistance Atherosclerosis Study (IRAS) (n=1008; age, 40 to 69 years; 33% with impaired glucose tolerance), a multicenter, population-based study. None of the subjects had clinical coronary artery disease. Insulin sensitivity (S(I)) was measured by a frequently sampled intravenous glucose tolerance test, and CRP was measured by a highly sensitive competitive immunoassay. All 3 inflammatory markers were correlated with several components of the IRS. Strong associations were found between CRP and measures of body fat (body mass index, waist circumference), S(I), and fasting insulin and proinsulin (all correlation coefficients >0.3, P<0.0001). The associations were consistent among the 3 ethnic groups of the IRAS. There was a linear increase in CRP levels with an increase in the number of metabolic disorders. Body mass index, systolic blood pressure, and S(I) were related to CRP levels in a multivariate linear regression model. We suggest that chronic subclinical inflammation is part of IRS. CRP, a predictor of cardiovascular events in previous reports, was independently related to S(I). These findings suggest potential benefits of anti-inflammatory or insulin-sensitizing treatment strategies in healthy individuals with features of IRS.

(2001)
New diagnostic criteria for diabetes based on fasting blood glucose (FBG) level were approved by the American Diabetes Association. The impact of using FBG only has not been evaluated thoroughly. The fasting and the 2-hour glucose (2h-BG) criteria were compared with regard to the prediction of mortality. Existing baseline data on glucose level at fasting and 2 hours after a 75-g oral glucose tolerance test from 10 prospective European cohort studies including 15 388 men and 7126 women aged 30 to 89 years, with a median follow-up of 8.8 years, were analyzed. Hazards ratios for death from all causes, cardiovascular disease, coronary heart disease, and stroke were estimated. Multivariate Cox regression analyses showed that the inclusion of FBG did not add significant information on the prediction of 2h-BG alone (P>.10 for various causes), whereas the addition of 2h-BG to FBG criteria significantly improved the prediction (P<.001 for all causes and P<.005 for cardiovascular disease). In a model including FBG and 2h-BG simultaneously, hazards ratios (95% confidence intervals) in subjects with diabetes on 2h-BG were 1.73 (1.45-2.06) for all causes, 1.40 (1.02-1.92) for cardiovascular disease, 1.56 (1.03-2.36) for coronary heart disease, and 1.29 (0.66-2.54) for stroke mortality, compared with the normal 2h-BG group. Compared with the normal FBG group, the corresponding hazards ratios in subjects with diabetes on FBG were 1.21 (1.01-1.44), 1.20 (0.88-1.64), 1.09 (0.71-1.67), and 1.64 (0.88-3.07), respectively. The largest number of excess deaths was observed in subjects who had impaired glucose tolerance but normal FBG levels. The 2h-BG is a better predictor of deaths from all causes and cardiovascular disease than is FBG.