Hypersecretion of ACTH and PRL from pituitary adenoma in MEN1, adequately managed by medical therapy 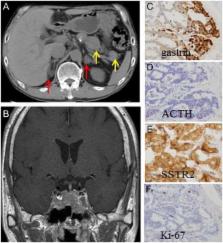 A 54-year-old man had gastrinoma, parathyroid hyperplasia and pituitary tumor. His family history indicated that he might have multiple endocrine neoplasia type 1 (MEN1). MEN1 gene analysis revealed a heterozygous germline mutation (Gly156Arg). Therefore, we diagnosed him with MEN1. Endocrinological tests revealed that his serum prolactin (PRL) and plasma adrenocorticotropic hormone (ACTH) levels were elevated to 1699 ng/mL and 125 pg/mL respectively. Immunohistochemical analysis of the resected pancreatic tumors revealed that the tumors did not express ACTH. Overnight 0.5 and 8 mg dexamethasone suppression tests indicated that his pituitary tumor was a PRL-ACTH-producing plurihormonal tumor. Before transsphenoidal surgery, cabergoline was initiated. Despite no decrease in the volume of the pituitary tumor, PRL and ACTH levels decreased to 37.8 ng/mL and 57.6 pg/mL respectively. Owing to the emergence of metastatic gastrinoma in the liver, octreotide was initiated. After that, PRL and ACTH levels further decreased to 5.1 ng/mL and 19.7 pg/mL respectively. He died from liver dysfunction, and an autopsy of the pituitary tumor was performed. In the autopsy study, histopathological and immunohistochemical (IHC) analysis showed that the tumor was single adenoma and the cells were positive for ACTH, growth hormone (GH), luteinizing hormone (LH) and PRL. RT-PCR analysis showed that the tumor expressed mRNA encoding all anterior pituitary hormones, pituitary transcription factor excluding estrogen receptor (ER) β, somatostatin receptor (SSTR) 2, SSTR5 and dopamine receptor D (D2R). PRL-ACTH-producing tumor is a very rare type of pituitary tumor, and treatment with cabergoline and octreotide may be useful for controlling hormone levels secreted from a plurihormonal pituitary adenoma, as seen in this case of MEN1.

Béatrice Chambe,  Françoise Boureille,  Corinne Montvernay … (2002)
To date, data on pituitary adenomas in MEN type 1 (MEN1) still have to be evaluated. We analyzed the data of a large series of 324 MEN1 patients from a French and Belgian multicenter study. Data on pituitary disease were compared with those from 110 non-MEN1 patients with pituitary adenomas, matched for age, year of diagnosis, and follow-up period. Genetic analysis of the MEN1 gene was performed in 197 of the MEN1 patients. In our MEN1 series, pituitary disease occurred in 136 of 324 (42%), less frequently than hyperparathyroidism (95%, P < 0.001) and endocrine enteropancreatic tumors (54%, P < 0.01). Mean age of onset of pituitary tumors was 38.0+/-15.3 yr (range, 12-83 yr). Pituitary disease was associated with hyperparathyroidism in 90% of cases, with enteropancreatic tumors in 47%, with adrenal tumors in 16%, and with thoracic neuroendocrine tumors in 4%. Pituitary disease was the initial lesion of MEN1 in 17% of all MEN1 patients. MEN1 pituitary adenomas were significantly more frequent in women than in men (50% vs. 31%, P < 0.001). Among the 136 pituitary adenomas, there were 85 prolactinomas and 12 GH-secreting, 6 ACTH-secreting, 13 cosecreting, and 20 nonsecreting tumors. Eighty-five percent of MEN1-related pituitary lesions were macroadenomas (vs. 42% in non-MEN1 patients, P < 0.001), including 32% of invasive cases. Among secreting adenomas, hormonal hypersecretion was normalized, after treatment, in only 42% (vs. 90% in non-MEN1 patients, P < 0.001), with a median follow-up of 11.4 yr. No correlation was found between the type of MEN1 germ-line mutation and the presence or absence of pituitary adenoma. Our study, based on a large group of MEN1 patients, shows that pituitary adenomas occur in 42% of the cases and are characterized by a larger size and a more aggressive presentation than without MEN1.

Gaetano Lombardi,  Marica Arvigo,  Petra E W de Haas … (2004)
The role of dopamine agonist treatment in corticotroph pituitary tumors is controversial. The aim of this study was to evaluate D(2) receptor expression in 20 corticotroph pituitary tumors and to correlate it to the in vitro effect of dopamine agonists on ACTH secretion and the in vivo effect of short-term cabergoline treatment on cortisol secretion. D(2) expression was evaluated by receptor-ligand binding, immunohistochemistry, and RT-PCR. A 50% or more decrease in daily urinary cortisol levels was considered a significant clinical response. At receptor-ligand binding, specific binding of [(125)I]epidepride was found in 80% of cases. At immunohistochemistry, specific D(2) immunostaining was found in 75% of cases. D(2) expression was found in 83.3% of cases (D(2long) in 40%, D(2short) in 20%, and both in 40%) by RT-PCR. Significant in vitro inhibition of ACTH secretion was found in 100% of D(2)-positive cases, but not in 100% of D(2)-negative cases by either bromocriptine or cabergoline. A significant in vivo inhibition of cortisol secretion after 3-month cabergoline treatment was found in 60%, although a normalization of cortisol secretion was found in 40% of cases. All cabergoline-responsive cases were associated with D(2) expression, whereas all noncabergoline-responsive cases but one were not associated with D(2) expression. In conclusion, functional D(2) receptors were expressed in approximately 80% of corticotroph pituitary tumors. The effectiveness of cabergoline in normalizing cortisol secretion in 40% of cases supports its therapeutic use in the management of Cushing's disease.

Pituitary tumors and hyperplasia in multiple endocrine neoplasia type 1 syndrome (MEN1): a case-control study in a series of 77 patients versus 2509 non-MEN1 patients.

Marc Mazucca,  Jacqueline Trouillas,  M Kujas … (2008)
Patients affected by the multiple endocrine neoplasia type I syndrome (MEN1) display a high incidence of pituitary adenomas, though it is still unknown whether these pituitary tumors have specific pathologic features that would distinguish them from sporadic pituitary adenomas. Pituitary tissue specimens of 77 MEN1 patients from the GTE (Groupe d'étude des Tumeurs Endocrines) register were compared with unselected 2509 non-MEN1 sporadic pituitary tumors and also to a control subgroup of 296 cases, where 1 MEN1 tumor was matched with 4 sporadic tumors of the same hormonal immunoprofile. Sex, age, size, and invasiveness of tumors, and menin gene mutations were documented. Histologic analysis took into account 33 items, including immunocytochemical data, the proliferative marker Ki-67, and an examination of the juxtatumoral pituitary. MEN1 tumors were significantly larger and more often invasive by histology. MEN1 patients with large pituitary tumors (grade IV) were younger than non-MEN1 patients. MEN1 tumors had no other characteristic histologic features and no predominance of any one hormone producing subtype. However, plurihormonal adenomas versus monohormonal and nonimmunoreactive adenomas were more frequent in MEN1 tumors (39%) than in the control non-MEN1 group (P = 0.001). Especially, the growth hormone and prolactin plurihormonality with unusual association with follicle-stimulating hormone, luteinizing hormone, or adrenocorticotropic hormone was more frequent in MEN1 tumors. In addition, multiple adenomas were significantly more frequent (4% vs. 0.1%; P < 0.0001), especially prolactin-adrenocorticotropic hormone. Somatotroph hyperplasia, with or without a microadenoma was found in only 3 MEN1 patients, with growth hormone-releasing hormone hypersecretion by a pancreatic tumor in 2 of them. All types of mutation were observed, including frameshifts, nonsenses, missenses, and 1 case of germline MEN1 encompassing large deletion, strongly suggesting the absence of any phenotype-genotype correlation.

Correspondence should be addressed to H Ariyasu; Email: ariyasu@ 123456wakayama-med.ac.jp