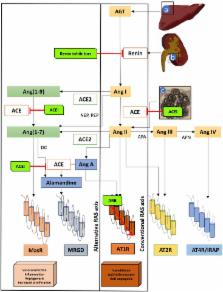 Renin-angiotensin system inhibitors (RASi) have shown potential anti-tumor effects that may have a significant impact in cancer therapy. The components of the renin-angiotensin system (RAS) including both, conventional and alternative axis, appear to have contradictory effects on tumor biology. The mechanisms by which RASi impair tumor growth extend beyond their function of modulating tumor vasculature. The major focus of this review is to analyze other mechanisms by which RASi reprogram the tumor immune microenvironment. These involve impairing hypoxia and acidosis within the tumor stroma, regulating inflammatory signaling pathways and oxidative stress, modulating the function of the non-cellular components and immune cells, and regulating the cross-talk between kalli krein kinin system and RAS.

Mechanisms regulating the recruitment of macrophages into hypoxic areas of tumors and other ischemic tissues.

Craig Murdoch, Athina Giannoudis, Claire Lewis (2004)
The mechanisms responsible for recruiting monocytes from the bloodstream into solid tumors are now well characterized. However, recent evidence has shown that these cells then differentiate into macrophages and accumulate in large numbers in avascular and necrotic areas where they are exposed to hypoxia. This parallels their tendency to congregate in ischemic areas of other diseased tissues such as atherosclerotic plaques and arthritic joints. In tumors, macrophages appear to undergo marked phenotypic changes when exposed to hypoxia and to switch on their expression of a number of mitogenic and proangiogenic cytokines and enzymes. This then promotes tumor growth, angiogenesis, and metastasis. Here, we compare the various mechanisms responsible for monocyte recruitment into tumors with those regulating the accumulation of macrophages in hypoxic/necrotic areas. Because the latter are best characterized in human tumors, we focus mainly on these but also discuss their relevance to macrophage migration in ischemic areas of other diseased tissues. Finally, we discuss the relevance of these mechanisms to the development of novel cancer therapies, both in providing targets to reduce the proangiogenic contribution made by hypoxic macrophages in tumors and in developing the use of macrophages to deliver therapeutic gene constructs to hypoxic areas of diseased tissues.

Obstacles Posed by the Tumor Microenvironment to T cell Activity: A Case for Synergistic Therapies.