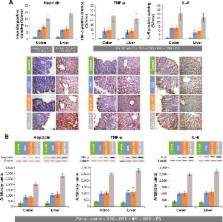 Iron deficiency is common in inflammatory bowel disease, yet oral iron therapy may worsen the disease symptoms and increase systemic and local oxidative stress. The aim of this study was to compare the effects of oral ferrous sulfate and iron polymaltose complex on inflammatory and oxidative stress markers in colitic rats.

Body weight, gross anatomy, crypt injury and inflammation scores, inflammatory parameters in liver and colon, as well as serum and liver hepcidin levels were not significantly different between colitic animals without iron treatment and colitic animals treated with iron polymaltose complex. In contrast, ferrous sulfate treatment caused significant worsening of these parameters. As opposed to ferrous sulfate, iron polymaltose complex caused less or no additional oxidative stress in the colon and liver compared to colitic animals without iron treatment.

Iron polymaltose complex had negligible effects on colonic tissue erosion, local or systemic oxidative stress, and local or systemic inflammation, even at high therapeutic doses, and may thus represent a valuable oral treatment of iron deficiency in inflammatory bowel disease.

Olivier Loréal,  Caroline Le Guérinel,  Martine Ropert … (2012)
Besides transferrin iron, which represents the normal form of circulating iron, non-transferrin bound iron (NTBI) has been identified in the plasma of patients with various pathological conditions in which transferrin saturation is significantly elevated. To show that: i) NTBI is present not only during chronic iron overload disorders (hemochromatosis, transfusional iron overload) but also in miscellaneous diseases which are not primarily iron overloaded conditions; ii) this iron species represents a potentially toxic iron form due to its high propensity to induce reactive oxygen species and is responsible for cellular damage not only at the plasma membrane level but also towards different intracellular organelles; iii) the NTBI concept may be expanded to include intracytosolic iron forms which are not linked to ferritin, the major storage protein which exerts, at the cellular level, the same type of protective effect towards the intracellular environment as transferrin in the plasma. Plasma NTBI and especially labile plasma iron determinations represent a new important biological tool since elimination of this toxic iron species is a major therapeutic goal. The NTBI approach represents an important mechanistic concept for explaining cellular iron excess and toxicity and provides new important biochemical diagnostic tools. This article is part of a Special Issue entitled Transferrins: Molecular mechanisms of iron transport and disorders. Copyright Â© 2011 Elsevier B.V. All rights reserved.

Guidelines on the diagnosis and management of iron deficiency and anemia in inflammatory bowel diseases.

Bas Oldenburg,  Ioannis E Koutroubakis,  Ragnar Befrits … (2007)
Anemia is a common complication of inflammatory bowel diseases. An international working party has formed and developed guidelines for evaluation and treatment of anemia and iron deficiency that should serve practicing gastroenterologists. Within a total of 16 statements, recommendations are made regarding diagnostic measures to screen for iron- and other anemia-related deficiencies regarding the triggers for medical intervention, treatment goals, and appropriate therapies. Anemia is a common cause of hospitalization, prevents physicians from discharging hospitalized patients, and is one of the most frequent comorbid conditions in patients with inflammatory bowel disease. It therefore needs appropriate attention and specific care.