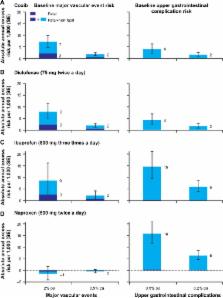 Non-steroidal anti-inflammatory drugs (NSAIDs), which act via inhibition of the cyclooxygenase (COX) isozymes, were discovered more than 100 years ago. They remain a key component of the pharmacological management of acute and chronic pain. The COX-1 and COX-2 isozymes have different biological functions; analgesic activity is primarily (although not exclusively) associated with inhibition of COX-2, while different side effects result from the inhibition of COX-1 and COX-2. All available NSAIDs, including acetaminophen and aspirin, are associated with potential side effects, particularly gastrointestinal and cardiovascular effects, related to their relative selectivity for COX-1 and COX-2. Since all NSAIDs exert their therapeutic activity through inhibition of the COX isozymes, strategies are needed to reduce the risks associated with NSAIDs while achieving sufficient pain relief. A better understanding of the inhibitory activity and COX-1/COX-2 selectivity of an NSAID at therapeutic doses, based on pharmacokinetic and pharmacodynamic properties (eg, inhibitory dose, absorption, plasma versus tissue distribution, and elimination), and the impact on drug tolerability and safety can guide the selection of appropriate NSAIDs for pain management. For example, many NSAIDs with moderate to high selectivity for COX-2 versus COX-1 can be administered at doses that maximize efficacy (~80% inhibition of COX-2) while minimizing COX-1 inhibition and associated side effects, such as gastrointestinal toxicity. Acidic NSAIDs with favorable tissue distribution and short plasma half-lives can additionally be dosed to provide near-constant analgesia while minimizing plasma concentrations to permit recovery of COX-mediated prostaglandin production in the vascular wall and other organs. Each patient’s clinical background, including gastrointestinal and cardiovascular risk factors, should be taken into account when selecting appropriate NSAIDs. New methods are emerging to assist clinicians in the selection of appropriate NSAIDs and their doses/schedules, such as biomarkers that may predict the response to NSAID treatment in individual patients.

Recommendations for the medical management of osteoarthritis of the hip and knee: 2000 update. American College of Rheumatology Subcommittee on Osteoarthritis Guidelines.

Cyclooxygenase isozymes: the biology of prostaglandin synthesis and inhibition.

Daniel L Simmons, Regina Botting, Timothy Hla (2004)
Nonsteroidal anti-inflammatory drugs (NSAIDs) represent one of the most highly utilized classes of pharmaceutical agents in medicine. All NSAIDs act through inhibiting prostaglandin synthesis, a catalytic activity possessed by two distinct cyclooxygenase (COX) isozymes encoded by separate genes. The discovery of COX-2 launched a new era in NSAID pharmacology, resulting in the synthesis, marketing, and widespread use of COX-2 selective drugs. These pharmaceutical agents have quickly become established as important therapeutic medications with potentially fewer side effects than traditional NSAIDs. Additionally, characterization of the two COX isozymes is allowing the discrimination of the roles each play in physiological processes such as homeostatic maintenance of the gastrointestinal tract, renal function, blood clotting, embryonic implantation, parturition, pain, and fever. Of particular importance has been the investigation of COX-1 and -2 isozymic functions in cancer, dysregulation of inflammation, and Alzheimer's disease. More recently, additional heterogeneity in COX-related proteins has been described, with the finding of variants of COX-1 and COX-2 enzymes. These variants may function in tissue-specific physiological and pathophysiological processes and may represent important new targets for drug therapy.