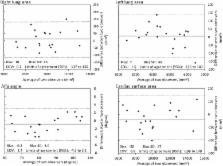 The left pulmonary artery (LPA) contributes more than the right (RPA) to total pulmonary regurgitation (PR) in patients after tetralogy of Fallot (TOF) repair, but the mechanism of this difference is not well understood. This study aimed to analyze the interplay between heart and lung size, mediastinal geometry, and differential PR.

Forty-eight Cardiovascular Magnetic Resonance (CMR) studies in patients after TOF repair were analyzed. In addition to the routine blood flow and ventricular volume quantification cardiac angle between the thoracic anterior-posterior line and the interventricular septum, right and left lung areas as well as right and left hemithorax areas were measured on an axial image. Statistical analysis was performed to compare flow parameters between RPA and LPA and to assess correlation among right ventricular volume, pulmonary blood flow parameters and lung area.

An enlarged and levorotated heart is associated with left lung compression and impaired flow into the left lung.

V Fuster,  G Danielson,  J Kirklin … (1993)
Although corrective surgery for tetralogy of Fallot has been available for more than 30 years, the occurrence of late sudden death in patients in whom surgery was apparently successful remains worrisome. We studied long-term survival among 163 patients who survived 30 days after complete repair of tetralogy of Fallot, examining follow-up hospital records and death certificates when relevant. The overall 32-year actuarial survival rate among all patients who survived surgery was 86 percent, as compared with an expected rate of 96 percent in a control population matched for age and sex (P < 0.01). Thirty-year actuarial survival rates were calculated for the patient subgroups. The survival rates among patients less than 5 years old, 5 to 7 years old, and 8 to 11 years old were 90, 93, and 91 percent, respectively--slightly less than the expected rates (P < 0.001, P = 0.06, and P = 0.02). Among patients 12 years old or older at the time of surgery, the survival rate was 76 percent, as compared with an expected rate of 93 percent (P < 0.001). The performance of a palliative Blalock-Taussig shunt procedure before repair, unlike the performance of a Waterston or Potts shunt procedure, was not associated with reduced long-term survival, nor was the need for a trans-annular patch at the time of surgery. Independent predictors of long-term survival were older age at operation (P = 0.02) and a higher ratio of right ventricular to left ventricular systolic pressure after surgery (P = 0.008). Late sudden death from cardiac causes occurred in 10 patients during the 32-year period. Among patients with surgically repaired tetralogy of Fallot, the rate of long-term survival after the postoperative period is excellent but remains lower than that in the general population. The risk of late sudden death is small.

Repaired tetralogy of Fallot: the roles of cardiovascular magnetic resonance in evaluating pathophysiology and for pulmonary valve replacement decision support

Tal Geva (2011)
Surgical management of tetralogy of Fallot (TOF) results in anatomic and functional abnormalities in the majority of patients. Although right ventricular volume load due to severe pulmonary regurgitation can be tolerated for many years, there is now evidence that the compensatory mechanisms of the right ventricular myocardium ultimately fail and that if the volume load is not eliminated or reduced by pulmonary valve replacement the dysfunction might be irreversible. Cardiovascular magnetic resonance (CMR) has evolved during the last 2 decades as the reference standard imaging modality to assess the anatomic and functional sequelae in patients with repaired TOF. This article reviews the pathophysiology of chronic right ventricular volume load after TOF repair and the risks and benefits of pulmonary valve replacement. The CMR techniques used to comprehensively evaluate the patient with repaired TOF are reviewed and the role of CMR in supporting clinical decisions regarding pulmonary valve replacement is discussed.