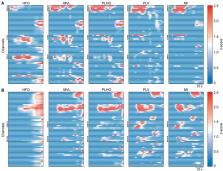 High frequency oscillations (HFOs) are traditional biomarkers to identify the epileptogenic tissue during presurgical evaluation in pharmacoresistant epileptic patients. Recently, the resection of brain tissue exhibiting coupling between the amplitude of HFOs and the phase of low frequencies demonstrated a more favorable surgical outcome. Here we compare the predictive value of ictal HFOs and four methods for quantifying the ictal phase-amplitude coupling, namely mean vector length, phase-locked high gamma, phase locking value, and modulation index (MI). We analyzed 32 seizures from 16 patients to identify the channels that exhibit HFOs and phase-locked HFOs during seizures. We compared the resection ratio, defined as the percentage of channels exhibiting coupling located in the resected tissue, with the postsurgical outcome. We found that the MI is the only method to show a significant difference between the resection ratios of patients with good and poor outcomes. We further show that the whole seizure, not only the onset, is critical to assess epileptogenicity using the phase-locked HFOs. We postulate that the superiority of MI stems from its capacity to assess coupling of discrete HFO events and its independence from the HFO power. These results confirm that quantitative analysis of HFOs can boost presurgical evaluation and indicate the paramount importance of algorithm selection for clinical applications.

Adriano B. L. Tort,  Robert Komorowski,  Nancy Kopell … (2010)
Neuronal oscillations of different frequencies can interact in several ways. There has been particular interest in the modulation of the amplitude of high-frequency oscillations by the phase of low-frequency oscillations, since recent evidence suggests a functional role for this type of cross-frequency coupling (CFC). Phase-amplitude coupling has been reported in continuous electrophysiological signals obtained from the brain at both local and macroscopic levels. In the present work, we present a new measure for assessing phase-amplitude CFC. This measure is defined as an adaptation of the Kullback-Leibler distance-a function that is used to infer the distance between two distributions-and calculates how much an empirical amplitude distribution-like function over phase bins deviates from the uniform distribution. We show that a CFC measure defined this way is well suited for assessing the intensity of phase-amplitude coupling. We also review seven other CFC measures; we show that, by some performance benchmarks, our measure is especially attractive for this task. We also discuss some technical aspects related to the measure, such as the length of the epochs used for these analyses and the utility of surrogate control analyses. Finally, we apply the measure and a related CFC tool to actual hippocampal recordings obtained from freely moving rats and show, for the first time, that the CA3 and CA1 regions present different CFC characteristics.

Theta-gamma coupling increases during the learning of item-context associations.

Joseph Manns,  Robert Komorowski,  Adriano B. L. Tort … (2009)
Phase-amplitude cross-frequency coupling (CFC) between theta (4-12 Hz) and gamma (30-100 Hz) oscillations occurs frequently in the hippocampus. However, it still remains unclear whether theta-gamma coupling has any functional significance. To address this issue, we studied CFC in local field potential oscillations recorded from the CA3 region of the dorsal hippocampus of rats as they learned to associate items with their spatial context. During the course of learning, the amplitude of the low gamma subband (30-60 Hz) became more strongly modulated by theta phase in CA3, and higher levels of theta-gamma modulation were maintained throughout overtraining sessions. Furthermore, the strength of theta-gamma coupling was directly correlated with the increase in performance accuracy during learning sessions. These findings suggest a role for hippocampal theta-gamma coupling in memory recall.

This article was submitted to Epilepsy, a section of the journal Frontiers in Neurology