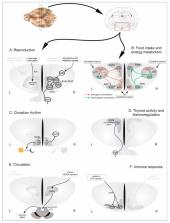 Anatomically, the brain is a symmetric structure. However, growing evidence suggests that certain higher brain functions are regulated by only one of the otherwise duplicated (and symmetric) brain halves. Hemispheric specialization correlates with phylogeny supporting intellectual evolution by providing an ergonomic way of brain processing. The more complex the task, the higher are the benefits of the functional lateralization (all higher functions show some degree of lateralized task sharing). Functional asymmetry has been broadly studied in several brain areas with mirrored halves, such as the telencephalon, hippocampus, etc. Despite its paired structure, the hypothalamus has been generally considered as a functionally unpaired unit, nonetheless the regulation of a vast number of strongly interrelated homeostatic processes are attributed to this relatively small brain region. In this review, we collected all available knowledge supporting the hypothesis that a functional lateralization of the hypothalamus exists. We collected and discussed findings from previous studies that have demonstrated lateralized hypothalamic control of the reproductive functions and energy expenditure. Also, sporadic data claims the existence of a partial functional asymmetry in the regulation of the circadian rhythm, body temperature and circulatory functions. This hitherto neglected data highlights the likely high-level ergonomics provided by such functional asymmetry.

A functional analysis of circadian pacemakers in nocturnal rodents

The stress system in depression and neurodegeneration: focus on the human hypothalamus.

G Meynen,  Dick F. Swaab,  Zhou Bao (2008)
The stress response is mediated by the hypothalamo-pituitary-adrenal (HPA) system. Activity of the corticotropin-releasing hormone (CRH) neurons in the hypothalamic paraventricular nucleus (PVN) forms the basis of the activity of the HPA-axis. The CRH neurons induce adrenocorticotropin (ACTH) release from the pituitary, which subsequently causes cortisol release from the adrenal cortex. The CRH neurons co-express vasopressin (AVP) which potentiates the CRH effects. CRH neurons project not only to the median eminence but also into brain areas where they, e.g., regulate the adrenal innervation of the autonomic system and affect mood. The hypothalamo-neurohypophysial system is also involved in stress response. It releases AVP from the PVN and the supraoptic nucleus (SON) and oxytocin (OXT) from the PVN via the neurohypophysis into the bloodstream. The suprachiasmatic nucleus (SCN), the hypothalamic clock, is responsible for the rhythmic changes of the stress system. Both centrally released CRH and increased levels of cortisol contribute to the signs and symptoms of depression. Symptoms of depression can be induced in experimental animals by intracerebroventricular injection of CRH. Depression is also a frequent side effect of glucocorticoid treatment and of the symptoms of Cushing's syndrome. The AVP neurons in the hypothalamic PVN and SON are also activated in depression, which contributes to the increased release of ACTH from the pituitary. Increased levels of circulating AVP are also associated with the risk for suicide. The prevalence, incidence and morbidity risk for depression are higher in females than in males and fluctuations in sex hormone levels are considered to be involved in the etiology. About 40% of the activated CRH neurons in mood disorders co-express nuclear estrogen receptor (ER)-alpha in the PVN, while estrogen-responsive elements have been found in the CRH gene promoter region, and estrogens stimulate CRH production. An androgen-responsive element in the CRH gene promoter region initiates a suppressing effect on CRH expression. The decreased activity of the SCN is the basis for the disturbances of circadian and circannual fluctuations in mood, sleep and hormonal rhythms found in depression. Neuronal loss was also reported in the hippocampus of stressed or corticosteroid-treated rodents and primates. Because of the inhibitory control of the hippocampus on the HPA-axis, damage to this structure was expected to disinhibit the HPA-axis, and to cause a positive feedforward cascade of increasing glucocorticoid levels over time. This 'glucocorticoid cascade hypothesis' of stress and hippocampal damage was proposed to be causally involved in age-related accumulation of hippocampal damage in disorders like Alzheimer's disease and depression. However, in postmortem studies we could not find the presumed hippocampal damage of steroid overexposure in either depressed patients or in patients treated with synthetic steroids.

J Speh,  Y Moore,  R Leak (2002)
The suprachiasmatic nucleus (SCN) of the hypothalamus is a dominant circadian pacemaker in the mammalian brain controlling the rest-activity cycle and a series of physiological and endocrine functions to provide a foundation for the successful elaboration of adaptive sleep and waking behavior. The SCN is anatomically and functionally organized into two subdivisions: (1) a core that lies adjacent to the optic chiasm, comprises predominantly neurons producing vasoactive intestinal polypeptide (VIP) or gastrin-releasing peptide (GRP) colocalized with GABA and receives dense visual and midbrain raphe afferents, and (2) a shell that surrounds the core, contains a large population of arginine vasopressin (AVP)-producing neurons in its dorsomedial portion, and a smaller population of calretinin (CAR)-producing neurons dorsally and laterally, colocalized with GABA, and receives input from non-visual cortical and subcortical regions. In this paper, we present a detailed quantitative analysis of the organization of the SCN core and shell in the rat and place this in the context of the functional significance of the subdivisions in the circadian control of regulatory systems.