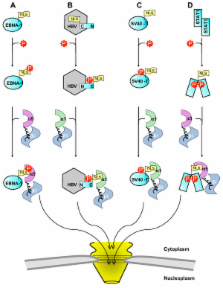 Phosphorylation is the most common and pleiotropic modification in biology, which plays a vital role in regulating and finely tuning a multitude of biological pathways. Transport across the nuclear envelope is also an essential cellular function and is intimately linked to many degeneration processes that lead to disease. It is therefore not surprising that phosphorylation of cargos trafficking between the cytoplasm and nucleus is emerging as an important step to regulate nuclear availability, which directly affects gene expression, cell growth and proliferation. However, the literature on phosphorylation of nucleocytoplasmic trafficking cargos is often confusing. Phosphorylation, and its mirror process dephosphorylation, has been shown to have opposite and often contradictory effects on the ability of cargos to be transported across the nuclear envelope. Without a clear connection between attachment of a phosphate moiety and biological response, it is difficult to fully understand and predict how phosphorylation regulates nucleocytoplasmic trafficking. In this review, we will recapitulate clue findings in the field and provide some general rules on how reversible phosphorylation can affect the nuclear-cytoplasmic localization of substrates. This is only now beginning to emerge as a key regulatory step in biology.

Lorraine Gibson,  P. Thompson,  James Higgins (1994)
The sensitivity of the commonly used progressive multiple sequence alignment method has been greatly improved for the alignment of divergent protein sequences. Firstly, individual weights are assigned to each sequence in a partial alignment in order to down-weight near-duplicate sequences and up-weight the most divergent ones. Secondly, amino acid substitution matrices are varied at different alignment stages according to the divergence of the sequences to be aligned. Thirdly, residue-specific gap penalties and locally reduced gap penalties in hydrophilic regions encourage new gaps in potential loop regions rather than regular secondary structure. Fourthly, positions in early alignments where gaps have been opened receive locally reduced gap penalties to encourage the opening up of new gaps at these positions. These modifications are incorporated into a new program, CLUSTAL W which is freely available.

Genomic expression programs in the response of yeast cells to environmental changes.

G Storz,  Michael Eisen,  John P. Brown … (2000)
We explored genomic expression patterns in the yeast Saccharomyces cerevisiae responding to diverse environmental transitions. DNA microarrays were used to measure changes in transcript levels over time for almost every yeast gene, as cells responded to temperature shocks, hydrogen peroxide, the superoxide-generating drug menadione, the sulfhydryl-oxidizing agent diamide, the disulfide-reducing agent dithiothreitol, hyper- and hypo-osmotic shock, amino acid starvation, nitrogen source depletion, and progression into stationary phase. A large set of genes (approximately 900) showed a similar drastic response to almost all of these environmental changes. Additional features of the genomic responses were specialized for specific conditions. Promoter analysis and subsequent characterization of the responses of mutant strains implicated the transcription factors Yap1p, as well as Msn2p and Msn4p, in mediating specific features of the transcriptional response, while the identification of novel sequence elements provided clues to novel regulators. Physiological themes in the genomic responses to specific environmental stresses provided insights into the effects of those stresses on the cell.