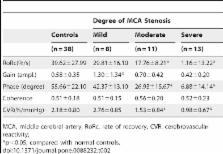 We sought to investigate the capacity of cerebral autoregulation and cerebrovascular reactivity (CVR) in patients with middle cerebral artery (MCA) stenosis.

Cerebral autoregulation and CVR were impaired in patients with ≥ 50% MCA stenosis. The measures of both hemodynamic properties were inversely correlated with the stenotic degree.

E Cullinane,  Bernd Markus (2001)
Cross-sectional studies suggest that impaired cerebral haemodynamics is associated with symptomatic status in patients with carotid stenosis and occlusion, but there is relatively little prospective data confirming this association. Transcranial Doppler ultrasonography was used to determine the reactivity of the middle cerebral artery to 8% carbon dioxide in air in 107 patients with either carotid occlusion (n = 48) or asymptomatic carotid stenosis (n = 59). Subjects were followed prospectively until stroke, transient ischaemic attack (TIA), death or study end. Mean duration of follow-up was 635 days. No patients dropped out due to operation before an end-point was reached, or were lost to follow-up. There were 11 ipsilateral ischaemic events during follow-up (six strokes, five TIAs). Exhausted ipsilateral middle cerebral artery reactivity (>20% increase in ipsilateral middle cerebral flow velocity in response to 8% carbon dioxide) predicted ipsilateral stroke and TIA risk in the whole group (P: < 0.00001) and in the carotid occlusion (P: = 0.019) and carotid stenosis (P: = 0.015) groups alone. It also predicted the risk of ipsilateral stroke alone in all three groups. Cox regression was performed, controlling for age, gender, hypertension, diabetes, smoking, ipsilateral CT infarct, degree of contralateral stenosis and the presence of ipsilateral stenosis versus occlusion. Exhausted reactivity remained an independent predictor of ipsilateral stroke and TIA (odds ratio 14.4, 95% confidence interval 2.63-78.74, P: = 0.0021). In contrast, the pulsatility index of the middle cerebral artery was a poor predictor of the risk of stroke. Reactivity to 6% carbon dioxide also predicted the risk of stroke and TIA, but slightly less effectively than reactivity to 8% carbon dioxide. Severely reduced cerebrovascular reactivity predicts the risk of ipsilateral stroke and TIA in patients with carotid occlusion, and to a lesser extent in asymptomatic carotid stenosis. Particularly in the former group, a study is required to determine whether revascularization reduces the risk of stroke in patients with exhausted reactivity.

Cerebral autoregulation in stroke: a review of transcranial Doppler studies.

This study was funded by Innovation Fund of the Chinese Academy of Medical Sciences and Peking Union Medical College (No. 20121002039), ( http://graduate.pumc.edu.cn/). Dr Jia Liu's work was supported by the Natural Science Foundation of China (No. 81000644), ( http://www.nsfc.gov.cn/Portal0/default152.htm). The funders had no role in study design, data collection and analysis, decision to publish, or preparation of the manuscript.