Previous studies have shown that hyponatremia is associated with greater mortality in hemodialysis (HD) patients. However, there have been few reports regarding the importance of the change in serum sodium (SNa) concentration (ΔSNa) during dialysis sessions. To investigate the relationships of pre-dialysis hyponatremia and ΔSNa during a dialysis session with mortality, we analyzed data from a national registry of Japanese patients with end-stage kidney disease.

We identified 178,114 patients in the database who were undergoing HD 3 times weekly. The study outcome was 2-year all-cause mortality, and the baseline SNa concentrations were categorized into quintiles. We evaluated the relationships of SNa concentration and ΔSNa with mortality using Cox proportional hazards models.

Lower pre-HD SNa concentration and higher ΔSNa are associated with a greater risk of mortality in patients undergoing HD. 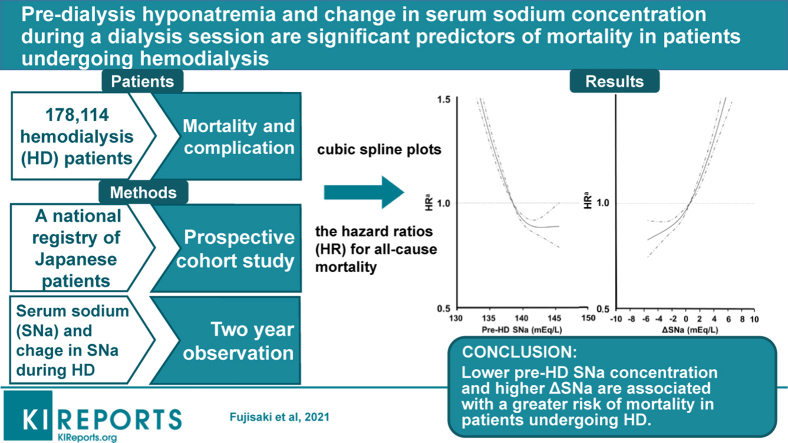 Relationship between admission serum sodium concentration and clinical outcomes in patients hospitalized for heart failure: an analysis from the OPTIMIZE-HF registry.

Hyponatremia and mortality: moving beyond associations.

Robert Zietse,  Ewout J. Hoorn (2013)
Acute hyponatremia can cause death if cerebral edema is not treated promptly. Conversely, if chronic hyponatremia is corrected too rapidly, osmotic demyelination may ensue, which also potentially is lethal. However, these severe complications of hyponatremia are relatively uncommon and often preventable. More commonly, hyponatremia predicts mortality in patients with advanced heart failure or liver cirrhosis. In these conditions, it generally is assumed that hyponatremia reflects the severity of the underlying disease rather than contributing directly to mortality. The same assumption holds for the recently reported associations between hyponatremia and mortality in patients with pulmonary embolism, pulmonary hypertension, pneumonia, and myocardial infarction. However, recent data suggest that chronic and mild hyponatremia in the general population also are associated with mortality. In addition, hyponatremia has been associated with mortality in long-term hemodialysis patients without residual function in whom the underlying disease cannot be responsible for hyponatremia. These new data raise the question of whether hyponatremia by itself can contribute to mortality or it remains a surrogate marker for other unknown risk factors. We review hyponatremia and mortality and explore the possibility that hyponatremia perturbs normal physiology in the absence of cerebral edema or osmotic demyelination. Copyright © 2013 National Kidney Foundation, Inc. Published by Elsevier Inc. All rights reserved.

Overview of regular dialysis treatment in Japan (as of 31 December 2008).

Yoshiharu Tsubakihara,  Ikuto Masakane,  Shinichi Nishi … (2010)
A nationwide statistical survey of 4124 dialysis facilities was conducted at the end of 2008 and 4081 facilities (99.0%) responded. The number of patients undergoing dialysis at the end of 2008 was determined to be 283,421, an increase of 8179 patients (3.0%) compared with that at the end of 2007. The number of dialysis patients per million at the end of 2008 was 2220. The crude death rate of dialysis patients from the end of 2007 to the end of 2008 was 9.8%. The mean age of the new patients begun on dialysis was 67.2 years and the mean age of the entire dialysis patient population was 65.3 years. For the primary diseases of the new patients begun on dialysis, the percentages of patients with diabetic nephropathy and chronic glomerulonephritis were 43.3% and 22.8%, respectively. Among the facilities that measured bacterial count in the dialysate solution in 2008, 52.0% of facilities ensured that a minimum dialysate solution volume of 10 mL was sampled. Among the patients treated by facility dialysis, 95.4% of patients were treated three times a week, and the average time required for one treatment was 3.92 ± 0.53 (SD) h. The average amounts of blood flow and dialysate solution flow were 197 ± 31 and 487 ± 33 mL/min, respectively. The number of patients using a polysulfone membrane dialyzer was the largest (50.7%) and the average membrane area was 1.63 ± 0.35 m(2). According to the classification of dialyzers by function, the number of patients using a type IV dialyzer was the largest (80.3%). The average concentrations of each electrolyte before treatment in patients treated with blood purification by extracorporeal circulation were 138.8 ± 3.3 mEq/L for serum sodium, 4.96 ± 0.81 mEq/L for serum potassium, 102.1 ± 3.1 mEq/L for serum chloride, and 20.7 ± 3.0 mEq/L for HCO(3) (-) ; the average serum pH was 7.35 ± 0.05. Regarding the type of vascular access in patients treated by facility dialysis, in 89.7% of patients an arteriovenous fistula was used and in 7.1% an arteriovenous graft was used. The percentage of hepatitis C virus (HCV)-positive patients who were HCV-negative in 2007 was 1.04%; the percentage is particularly high in patients with a period of dialysis of 20 years or longer. The risk of becoming HCV-positive was high in patients with low serum creatinine, serum albumin, and serum total cholesterol levels, and/or a low body mass index before beginning dialysis. © 2010 The Authors. Journal compilation © 2010 International Society for Apheresis.