Classification of Movement and Inhibition Using a Hybrid BCI 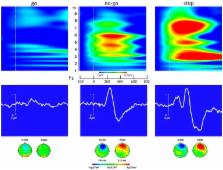 Brain-computer interfaces (BCIs) are an emerging technology that are capable of turning brain electrical activity into commands for an external device. Motor imagery (MI)—when a person imagines a motion without executing it—is widely employed in BCI devices for motor control because of the endogenous origin of its neural control mechanisms, and the similarity in brain activation to actual movements. Challenges with translating a MI-BCI into a practical device used outside laboratories include the extensive training required, often due to poor user engagement and visual feedback response delays; poor user flexibility/freedom to time the execution/inhibition of their movements, and to control the movement type (right arm vs. left leg) and characteristics (reaching vs. grabbing); and high false positive rates of motion control. Solutions to improve sensorimotor activation and user performance of MI-BCIs have been explored. Virtual reality (VR) motor-execution tasks have replaced simpler visual feedback (smiling faces, arrows) and have solved this problem to an extent. Hybrid BCIs (hBCIs) implementing an additional control signal to MI have improved user control capabilities to a limited extent. These hBCIs either fail to allow the patients to gain asynchronous control of their movements, or have a high false positive rate. We propose an immersive VR environment which provides visual feedback that is both engaging and immediate, but also uniquely engages a different cognitive process in the patient that generates event-related potentials (ERPs). These ERPs provide a key executive function for the users to execute/inhibit movements. Additionally, we propose signal processing strategies and machine learning algorithms to move BCIs toward developing long-term signal stability in patients with distinctive brain signals and capabilities to control motor signals. The hBCI itself and the VR environment we propose would help to move BCI technology outside laboratory environments for motor rehabilitation in hospitals, and potentially for controlling a prosthetic.

Ian Spence,  Jay Pratt,  Jing Feng (2007)
We demonstrate a previously unknown gender difference in the distribution of spatial attention, a basic capacity that supports higher-level spatial cognition. More remarkably, we found that playing an action video game can virtually eliminate this gender difference in spatial attention and simultaneously decrease the gender disparity in mental rotation ability, a higher-level process in spatial cognition. After only 10 hr of training with an action video game, subjects realized substantial gains in both spatial attention and mental rotation, with women benefiting more than men. Control subjects who played a non-action game showed no improvement. Given that superior spatial skills are important in the mathematical and engineering sciences, these findings have practical implications for attracting men and women to these fields.

Gert Pfurtscheller,  Brendan Allison,  Clemens Brunner … (2010)
Nowadays, everybody knows what a hybrid car is. A hybrid car normally has two engines to enhance energy efficiency and reduce CO2 output. Similarly, a hybrid brain-computer interface (BCI) is composed of two BCIs, or at least one BCI and another system. A hybrid BCI, like any BCI, must fulfill the following four criteria: (i) the device must rely on signals recorded directly from the brain; (ii) there must be at least one recordable brain signal that the user can intentionally modulate to effect goal-directed behaviour; (iii) real time processing; and (iv) the user must obtain feedback. This paper introduces hybrid BCIs that have already been published or are in development. We also introduce concepts for future work. We describe BCIs that classify two EEG patterns: one is the event-related (de)synchronisation (ERD, ERS) of sensorimotor rhythms, and the other is the steady-state visual evoked potential (SSVEP). Hybrid BCIs can either process their inputs simultaneously, or operate two systems sequentially, where the first system can act as a “brain switch”. For example, we describe a hybrid BCI that simultaneously combines ERD and SSVEP BCIs. We also describe a sequential hybrid BCI, in which subjects could use a brain switch to control an SSVEP-based hand orthosis. Subjects who used this hybrid BCI exhibited about half the false positives encountered while using the SSVEP BCI alone. A brain switch can also rely on hemodynamic changes measured through near-infrared spectroscopy (NIRS). Hybrid BCIs can also use one brain signal and a different type of input. This additional input can be an electrophysiological signal such as the heart rate, or a signal from an external device such as an eye tracking system.