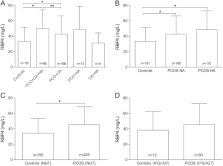 Serum levels of retinol-binding protein 4 (RBP4), an adipokine thought to affect systemic insulin sensitivity, were compared between women with polycystic ovary syndrome (PCOS) and non-PCOS controls to evaluate the association of RBP4 with clinical, hormonal and metabolic parameters of PCOS.

Although serum RBP4 levels were increased in younger women with PCOS compared with age-matched non-PCOS controls, RBP4 does not seem to be a good marker of insulin resistance or other metabolic derangements in women with PCOS.

Martin Wabitsch,  Pamela Fischer-Posovszky,  Primoz Kotnik (2011)
Adipose tissue is an endocrine organ secreting biologically active factors called adipokines that act on both local and distant tissues. Adipokines have an important role in the development of obesity-related comorbidities not only in adults but also in children and adolescents. Retinol binding protein 4 (RBP4) is a recently identified adipokine suggested to link obesity with its comorbidities, especially insulin resistance, type 2 diabetes (T2D), and certain components of the metabolic syndrome. However, data, especially resulting from the clinical studies, are conflicting. In this review, we summarize up-to-date knowledge on RBP4's role in obesity, development of insulin resistance, and T2D. Special attention is given to studies on children and adolescents. We also discuss the role of possible confounding factors that should be taken into account when critically evaluating published studies or planning new studies on this exciting adipokine.