A Meta-Regression Analysis of the Effectiveness of Mosquito Nets for Malaria Control: The Value of Long-Lasting Insecticide Nets 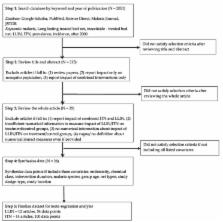 Long-lasting insecticidal nets (LLINs) have been widely used as an effective alternative to conventional insecticide-treated nets (ITNs) for over a decade. Due to the growing number of field trials and interventions reporting the effectiveness of LLINs in controlling malaria, there is a need to systematically review the literature on LLINs and ITNs to examine the relative effectiveness and characteristics of both insecticide nettings. A systematic review of over 2000 scholarly articles published since the year 2000 was conducted. The odds ratios (ORs) of insecticidal net effectiveness in reducing malaria were recorded. The final dataset included 26 articles for meta-regression analysis, with a sample size of 154 subgroup observations. While there is substantial heterogeneity in study characteristics and effect size, we found that the overall OR for reducing malaria by LLIN use was 0.44 (95% CI = 0.41–0.48, p < 0.01) indicating a risk reduction of 56%, while ITNs were slightly less effective with an OR of 0.59 (95% CI = 0.57–0.61, p <0.01). A meta-regression model confirms that LLINs are significantly more effective than ITNs in the prevention of malaria, when controlling for other covariates. For both types of nets, protective efficacy was greater in high transmission areas when nets were used for an extended period. However, cross-sectional studies may overestimate the effect of the nets. The results surprisingly suggest that nets are less effective in protecting children under the age of five, which may be due to differences in child behavior or inadequate coverage. Compared to a previous meta-analysis, insecticide-treated nets appear to have improved their efficacy despite the risks of insecticide resistance. These findings have practical implications for policymakers seeking effective malaria control strategies.

C Lengeler (2004)
Malaria is an important cause of illness and death in many parts of the world, especially in sub-Saharan Africa. There has been a renewed emphasis on preventive measures at community and individual levels. Insecticide-treated nets (ITNs) are the most prominent malaria preventive measure for large-scale deployment in highly endemic areas. To assess the impact of insecticide-treated bed nets or curtains on mortality, malarial illness (life-threatening and mild), malaria parasitaemia, anaemia, and spleen rates. I searched the Cochrane Infectious Diseases Group trials register (January 2003), CENTRAL (The Cochrane Library, Issue 1, 2003), MEDLINE (1966 to October 2003), EMBASE (1974 to November 2002), LILACS (1982 to January 2003), and reference lists of reviews, books, and trials. I handsearched journals, contacted researchers, funding agencies, and net and insecticide manufacturers. Individual and cluster randomized controlled trials of insecticide-treated bed nets or curtains compared to nets without insecticide or no nets. Trials including only pregnant women were excluded. The reviewer and two independent assessors reviewed trials for inclusion. The reviewer assessed trial methodological quality and extracted and analysed data. Fourteen cluster randomized and eight individually randomized controlled trials met the inclusion criteria. Five trials measured child mortality: ITNs provided 17% protective efficacy (PE) compared to no nets (relative rate 0.83, 95% confidence interval (CI) 0.76 to 0.90), and 23% PE compared to untreated nets (relative rate 0.77, 95% CI 0.63 to 0.95). About 5.5 lives (95% CI 3.39 to 7.67) can be saved each year for every 1000 children protected with ITNs. In areas with stable malaria, ITNs reduced the incidence of uncomplicated malarial episodes in areas of stable malaria by 50% compared to no nets, and 39% compared to untreated nets; and in areas of unstable malaria: by 62% for compared to no nets and 43% compared to untreated nets for Plasmodium falciparum episodes, and by 52% compared to no nets and 11% compared to untreated nets for P. vivax episodes. When compared to no nets and in areas of stable malaria, ITNs also had an impact on severe malaria (45% PE, 95% CI 20 to 63), parasite prevalence (13% PE), high parasitaemia (29% PE), splenomegaly (30% PE), and their use improved the average haemoglobin level in children by 1.7% packed cell volume. ITNs are highly effective in reducing childhood mortality and morbidity from malaria. Widespread access to ITNs is currently being advocated by Roll Back Malaria, but universal deployment will require major financial, technical, and operational inputs.

Costs and consequences of large-scale vector control for malaria

Sustainability of reductions in malaria transmission and infant mortality in western Kenya with use of insecticide-treated bednets: 4 to 6 years of follow-up.

Kubaje Adazu, Bradley H. Rosen, J. Vulule … (2004)
Insecticide-treated bednets reduce malaria transmission and child morbidity and mortality in short-term trials, but this impact may not be sustainable. Previous investigators have suggested that bednet use might paradoxically increase mortality in older children through delayed acquisition of immunity to malaria. To determine whether adherence to and public health benefits of insecticide-treated bednets can be sustained over time and whether bednet use during infancy increases all-cause mortality rates in older children in an area of intense perennial malaria transmission. A community randomized controlled trial in western Kenya (phase 1: January 1997 to February 2000) followed by continued surveillance of adherence, entomologic parameters, morbidity indicators, and all-cause mortality (phase 2: April 1999 to February 2002), and extended demographic monitoring (January to December 2002). A total of 130,000 residents of 221 villages in Asembo and Gem were randomized to receive insecticide-treated bednets at the start of phase 1 (111 villages) or phase 2 (110 villages). Proportion of children younger than 5 years using insecticide-treated bednets, mean number of Anopheles mosquitoes per house, and all-cause mortality rates. Adherence to bednet use in children younger than 5 years increased from 65.9% in phase 1 to 82.5% in phase 2 (P<.001). After 3 to 4 years of bednet use, the mean number of Anopheles mosquitoes per house in the study area was 77% lower than in a neighboring area without bednets (risk ratio, 0.23; 95% confidence interval [CI], 0.15-0.35). All-cause mortality rates in infants aged 1 to 11 months were significantly reduced in intervention villages during phase 1 (hazard ratio [HR], 0.78; 95% CI, 0.67-0.90); low rates were maintained during phase 2. Mortality rates did not differ during 2002 (after up to 6 years of bednet use) between children from former intervention and former control households born during phase 1 (HR, 1.01; 95% CI, 0.86-1.19). The public health benefits of insecticide-treated bednets were sustained for up to 6 years. There is no evidence that bednet use from birth increases all-cause mortality in older children in an area of intense perennial transmission of malaria.