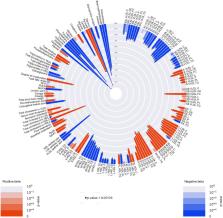 Insulin is the key regulator of glucose metabolism, but it is difficult to dissect direct insulin from glucose-induced effects. We aimed to investigate the effects of hyperinsulemia on metabolomic measures under euglycemic conditions in nondiabetic participants.

Hui Chen,  Ranganath Muniyappa,  Michael Quon … (2007)
Insulin resistance contributes to the pathophysiology of diabetes and is a hallmark of obesity, metabolic syndrome, and many cardiovascular diseases. Therefore, quantifying insulin sensitivity/resistance in humans and animal models is of great importance for epidemiological studies, clinical and basic science investigations, and eventual use in clinical practice. Direct and indirect methods of varying complexity are currently employed for these purposes. Some methods rely on steady-state analysis of glucose and insulin, whereas others rely on dynamic testing. Each of these methods has distinct advantages and limitations. Thus, optimal choice and employment of a specific method depends on the nature of the studies being performed. Established direct methods for measuring insulin sensitivity in vivo are relatively complex. The hyperinsulinemic euglycemic glucose clamp and the insulin suppression test directly assess insulin-mediated glucose utilization under steady-state conditions that are both labor and time intensive. A slightly less complex indirect method relies on minimal model analysis of a frequently sampled intravenous glucose tolerance test. Finally, simple surrogate indexes for insulin sensitivity/resistance are available (e.g., QUICKI, HOMA, 1/insulin, Matusda index) that are derived from blood insulin and glucose concentrations under fasting conditions (steady state) or after an oral glucose load (dynamic). In particular, the quantitative insulin sensitivity check index (QUICKI) has been validated extensively against the reference standard glucose clamp method. QUICKI is a simple, robust, accurate, reproducible method that appropriately predicts changes in insulin sensitivity after therapeutic interventions as well as the onset of diabetes. In this Frontiers article, we highlight merits, limitations, and appropriate use of current in vivo measures of insulin sensitivity/resistance.

Use and abuse of HOMA modeling.

T Wallace,  J Levy,  D. Matthews (2004)
Homeostatic model assessment (HOMA) is a method for assessing beta-cell function and insulin resistance (IR) from basal (fasting) glucose and insulin or C-peptide concentrations. It has been reported in >500 publications, 20 times more frequently for the estimation of IR than beta-cell function. This article summarizes the physiological basis of HOMA, a structural model of steady-state insulin and glucose domains, constructed from physiological dose responses of glucose uptake and insulin production. Hepatic and peripheral glucose efflux and uptake were modeled to be dependent on plasma glucose and insulin concentrations. Decreases in beta-cell function were modeled by changing the beta-cell response to plasma glucose concentrations. The original HOMA model was described in 1985 with a formula for approximate estimation. The computer model is available but has not been as widely used as the approximation formulae. HOMA has been validated against a variety of physiological methods. We review the use and reporting of HOMA in the literature and give guidance on its appropriate use (e.g., cohort and epidemiological studies) and inappropriate use (e.g., measuring beta-cell function in isolation). The HOMA model compares favorably with other models and has the advantage of requiring only a single plasma sample assayed for insulin and glucose. In conclusion, the HOMA model has become a widely used clinical and epidemiological tool and, when used appropriately, it can yield valuable data. However, as with all models, the primary input data need to be robust, and the data need to be interpreted carefully.